Beyond Liturgy? Architecture and Holiness

Beyond Liturgy? Architecture and Holiness


2.00-2.30: Paul Binksi (Cambridge): Reflections of the ‘wonderful height and size’
of Gothic Great Churches and the Medieval Sublime

3.45-4.15: Gauvin A Bailey (Aberdeen): The Andean Hybrid Baroque: Convergent
Cultures in the Churches of Colonial Peru

4.15-4.45: Natasha Eaton (UCL): Tourism qua the sacred: Dwelling and the liturgy
of nomads in colonial India.

By the late 17th century many Neapolitan convents contained a scala santa or holy staircase modelled on the relic of the Holy Stairs in San Giovanni in Laterano in Rome. Hidden from view of the lay community, these private
devotional spaces present fascinating material evidence through which to interrogate the relationship between the
construction of female holiness, architecture and performance in conventual Naples. At convents such as S.Chiara, S. Gregorio Armeno and S. Maria della Sapienza the scale sante were loci of spiritual memory re-appropriated by the female communities who envisaged, constructed and activated them. Although in theory the demands of clausura (strict enclosure) limited the physical movement of nuns beyond their tightly protected communities, the scale sante presented significant opportunities for religious women to break these boundaries without leaving their cloister. In their spiritual pilgrimages the nuns transcended time, space and geography actively re-defining their relationship with the holy. Yet the spaces of the scale sante were far from simply a stage set or frame for their meditative performance, rather through architecture and visual culture the nuns mapped sacred topography within the space of their cloister, thereby elevating the spiritual status of their convent and asserting the holy nature of its inhabitants.

Paul Binksi (Cambridge): Reflections of the ‘wonderful height and size’ of Gothic Great Churches and the Medieval Sublime

This paper opens with a brief critique of Auerbach’s sermo humilis; it objects to its unhistorical extension by art
historians to the entire domain of Christian representation. Magnificent mode: Auerbach’s thesis concerns
representation; but much important aesthetic activity is non-representational: architecture especially. The magnificent mode is discussed. Varietas is then approached as a rhetorical virtue and a product of a politics of magnificent command, conquest. The notion of charismatic people (eg saints) and charismatic materials (eg marbles) is then outlined. The Colossal, the Wonderful: The power of biblical and liturgical language for architecture opens an account of gigantism in the visual arts 1100-1250 during the ‘building boom’. The end of the building boom marks the rise of architectural reveries, as in Titurel. This is considered as a text on varietas, but also scale – as manifest through acoustics. It is a species of gesamtkunstwerk. Automata, kunst, varietas are a ‘staging’ of wonder. Passion and Transcendence: The early Modern sublime opens a discussion of the ‘affect’ of medieval wonder-responses. Medieval greatness lies in the very big and very small. Longinus’s severing of rhetoric and literature leads into an account, again via the early modern sublime, of transcendence. Rapture is seen as a consequence of the apprehension of unutterable varietas – less scale. The anagogic tradition is followed briefly into the 14th century (Langland) to see how the experience of varietas-curiositas replaces anagogy with social satire. Social realism returns to a final critique, again re Auerbach, of efforts to shoehorn religious experience into prior stylistic categories.

Gauvin A Bailey (Aberdeen): The Andean Hybrid Baroque: Convergent Cultures in the Churches of Colonial Peru

In the southern Andes during the last 150 years of colonial rule, when the Spanish crown was losing its grip on the
Americas and Amerindian, groups began organizing into activist and increasingly violent political movements, a style of architectural sculpture emerged that remains one of the most vigorous and creative outcomes of the meeting of two cultures. Known most commonly as Estilo Mestizo (“Mestizo Style”), this carving is distinguished by its flattened, textile-like sculpture and its virtuoso combination of European late Renaissance and Baroque forms with Andean sacred and profane symbolism. The Andean Hybrid Baroque was created under conditions of military and cultural oppression in which European visual forms were dominant; it was at times built by laborers treated little better than slaves; and it emerged after more than a century of systematic and brutal destruction of the sacred objects and rites of Andean religion. This situation makes the hybridity of Andean Hybrid Baroque appear all the more astonishing.

Natasha Eaton (CL): Tourism qua the sacred: Dwelling and the liturgy of nomads in colonial India.

This paper explores the disjunctures and the flashes of recognition between British colonial and Indian (esp. Sufi)
practices of pictorial travel in early 19th-century Delhi. Challenging prevailing ideas of what might be the polarities of the 'Imperial Picturesque'(innovative/at least civilized) and 'Company School' (banal, mimic)painting, it reconsiders the agency of British and Indian artists in their capacity as travellers - and possibly as nomads. This brings into question practices of spatial mimicry; the cross-cultural relationship between movement and images and examines the threshold between Indian nomadic and colonial ideas of place, so as to focus on the hybridization of travel liturgies. 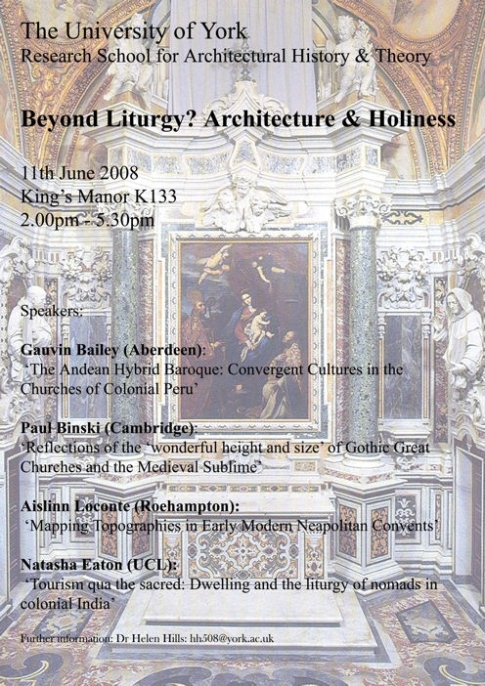