The archives linked below contain sets of GeoTIFFs. The maps use a geographic coordinate system (WGS1984) which is embedded in the files. To explore the maps, you will need a GIS program such as QGIS or the R raster package.

See the README for variable definitions, nomenclature and units. 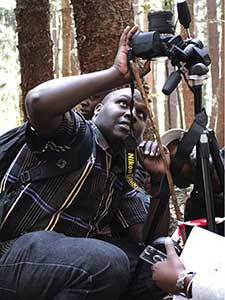 Across East Africa, we measure LAI and FAPAR (fraction of absorbed photosynthetically active radiation), both Essential Climate Variables. Targeting a wide range of habitats, we gain an understanding of how canopy structure varies with environmental traits and human disturbance across space and time.

Through a wider collaborative network (The Global LAI Project) we are currently working to expand the dataset across the tropics.

Time is the dominant constraint when determining LAI in the field. Harvesting approaches yield the most accurate results, but are very site-specific and impractical to implement over large areas. Indirect approaches now enable more rapid assessments of LAI - for a review of techniques, see Bréda (2003) and Jonckheere et al. (2004). 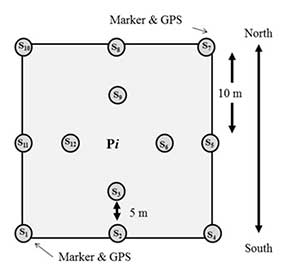 Back in the lab

SunScan LAI readings are averaged within each plot, yielding a final estimate of LAI. Estimation of LAI from hemispherical images (more accurately Plant Area Index) requires a little more work. First, the images are pre-processed, extracting the blue band information and then applying a thresholding algorithm to achieve maximum contrast between leaf and sky. These dichotomised images can then be used to estimate gap fraction, LAI and FAPAR per plot. For further details on these techniques, see Pfeifer et al. (2012a).

Links between VIs and ecological traits are region-specific, which can introduce aggregation errors when upscaling from plot-level data to moderate/coarse resolution satellite data. A range of earth observation products for LAI and ecosystem productivity exist (reviewed in Pfeifer et al. 2012b). At KITE, we validate the accuracy of these maps using our data.

The Eastern Arc Mountains (EAM) consist of 13 disjunct ranges (blocs), stretching from the Taita Hills in south-east Kenya to the Udzungwa Mountains in south-central Tanzania.

Since the 1980s, the EAM have been recognised as biologically distinct from surrounding Afromontane habitats. Exceptional concentrations of rare species are explained by long-term consistency of rain-bearing winds from the Indian Ocean, in combination with long-term isolation of the mountains; the substrate is Precambrian crystalline basement rock, uplifted from the African plateau during the Miocene c. 30 MY ago.

While a qualitative definition has been widely applied (sensu Lovett 1990), precise spatial limits for the area of endemism have been lacking. Thus, fundamental biogeographical questions such as “what is the area of the EAM?” and “how many (endemic) species occur there?” have been troublesome to address with consistency.‌

In collaboration with Valuing the Arc, the TAITA project and Tropicos, we provide a spatial platform upon which to assemble, analyse and disseminate geographic information for the EAM. The delineation considers elevation, slope angle, terrain roughness and summit prominence relative to base heights (Platts et al. 2011). The boundaries maximise inclusion of preclearance and present-day forest extent, and known distributions of rare mountain flora within a minimal mountain area. Download GIS files here

Accordingly, the EAM cover 5.2 million ha and have an elevational range of 121 m to 2626 m above sea level. Less than 10% of the mountain area is forest - around a third of the preclearance extent. Three quarters of the forest area is under some form of protection: half designated for catchment protection or multi-resource use (Forest Reserves) and the remainder gazetted for nature conservation (Nature Reserves and a National Park). Smaller areas are under participatory management schemes, whereby local communities are jointly (JFM) or solely (CBFM) responsible for managing natural forests for sustainable use and conservation.

Population density is higher than the national average for Tanzania, with 2.3 million people living in the mountains in 2002. The most densely populated mountains are in West Usambara and North Pare, followed by East Usambara and Uluguru. Three of these blocs are also among the most important for species richness and endemism (cf. Burgess et al. 2007, Rovero et al. 2014). 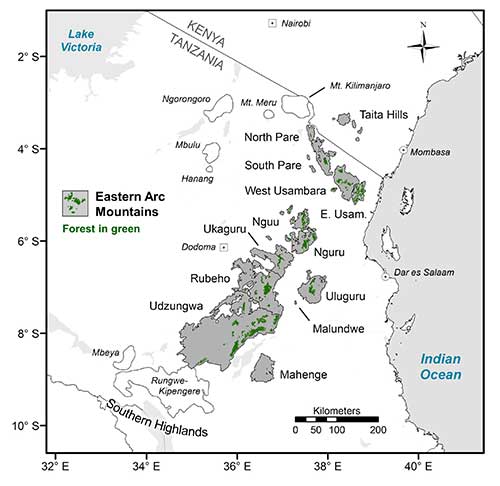 Annual rainfall in the EAM is typically in the range 500-2000 mm, but in some blocs exceeds 3000 mm. Windward eastern aspects are wettest due to orographic rainfall and mist driven by Indian Ocean currents. Drier western flanks tend to support deciduous woodland rather than moist forest assemblages, while grassland and heathland are common on the uppermost montane plateaus. Northern blocs are generally recognised to have two distinct peaks in rainfall: short rains from March to May and heavier rains from October to December. In the south, one rainy season prevails from December to April. East Usambara and Uluguru experience the most benign dry seasons, with some eastern aspects perhumid (> 100 mm/month). Drier spells are most prolonged and intense on western margins of Ukaguru, Rubeho and Udzungwa.

In work led by Roy Gereau (Missouri Botanical Garden), the ecoregion definiton is being used to produce a definitive plant checklist of distribution and endemism. At the last count (2014/01), a total of 4066 indigenous vascular plant species (4996 plant taxa including species, subspecies and varieties) were known from the EAM. Of these, 508 species (609 taxa) have been found nowhere else on Earth, 281 species are endemic to a single mountain bloc, and 486 species (12%) have been assessed in a threatened category for the IUCN Red List.

In an early analysis of the world’s hotspots of biodiversity, Myers (1990) described the EAM as containing 1600 plant species, of which 535 endemic (based on Lovett 1988), equating respectively to under- and over-estimates of 61% and 6%. The latter was remarkably accurate given the data available at the time, but the inferred level of endemism was 2.5 times higher than the current estimate (33% cf. 13%), and not all the blocs were included (e.g. Taita Hills).

One of the highest projections of plant endemism in the EAM comes from Lovett and Wasser (1993), who suggested there may be 800 plant species found nowhere else. Twenty years on, many publications and websites still quote 800 plant species endemic to the EAM, alongside a wide range of estimates for forest and mountain area. The ecoregion definition presented here, combined with rigorous taxonomy, should end such confusion by providing a consistent spatial platform upon which the state of knowledge can be continually updated. 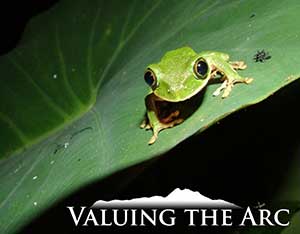 The ecoregion definition is the spatial basis for analyses conducted by Valuing the Arc, an international programme to map and value ecosystem services flowing from the EAM.

People in the mountains benefit from provisions such as firewood and charcoal for energy, building materials (poles and thatch), medicines and food (fruit, tubers, honey and bushmeat). For many, the forests and woodlands have spiritual, cultural and historical meaning. Beyond the ecoregion boundary, people benefit from the provision of charcoal and timber, and from the regulation of hydrological flows to downstream agricultural areas and major population centres, where the water is used for hydroelectric power generation, drinking and industry. Globally, society benefits from the capacity of woody biomes in the EAM to mitigate climate change, through the carbon sequestered and stored in their biomass.

‌This map shows many of the palaeoenvironmental sites published from East Africa and includes a list of sites and associated references analysed at KITE.

Clicking the map will launch an interactive Google Map that can be used to locate sites and associated publication references.

Freely available data for environmental research in Africa. Help to populate this resource by emailing suggestions and corrections to environment-kite@york.ac.uk