Bryan Shorrocks came to the Department of Environment and Geography, at York, in November 2006. Before his association with York he was Professor of Population Ecology at the University of Leeds. For many years he was senior editor of the Journal of Animal Ecology and is presently one of the Editors for the African Journal of Ecology. He has twice been a member of the Council of the British Ecological Society, and has been on research committees for NERC (TLS, and Large Scale Ecological Processes in Ecology), and AFRC (Plants & Environment, and Global Environment Change). Presently he gives scientific advice to the Namibian Cheetah Project, is UK representative for the East African Wildlife Society and is a Trustee of the East African Wildlife Trust (to advise on scientific matters). This Trust was originally started by Richard Leakey, in Kenya, but has now moved to the UK. He carries out most of his East African Research at the Mpala Research Centre, central Kenya, Etosha National Park, Namibia, and Samburu National Reserve, Kenya.

Over many years Professor Shorrocks has supervised 36 postgraduate students, funded by a variety of sources. His total research grant income to date (27 research grants) is £1,778,246. During the last 26 years, he has had 147 publications.

My principal African research now centres around giraffe populations and their social networks.  The work started in Laikipia, central Kenya, where some of the techniques were piloted.  The work then moved to Etosha National Park, Namibia (in association with the University of Queensland, Australia) and from 2012 is again focussed back in Kenya, in northern Laikipia, in association with John Doherty.

The IUCN report in 1999 suggests that although reticulated giraffe still occurs widely within its historical range in northern Kenya, numbers are declining. It is therefore increasingly vital to understand and look after the populations that use Laikipia, and to estimate accurately how many there are and how they interact with each other. In studies of both population density and structure, the best type of data is that obtained when individuals are identified uniquely. This allows the best estimates for population numbers, and also enables the dynamic state of the population network structure to be identified. We have been developing a method of identifying individual giraffe that is non-invasive, reliable and efficient to use with large numbers of individuals.

The identification system tested at Mpala Research Centre uses only a part of the neck pattern of the giraffe. This is convenient because frequently you only see the neck of the giraffe among tall vegetation. This neck pattern is converted to a ‘neck code’, written for each individual. This is then used to search a computer database. The neck pattern that is coded is the section that runs along the back of the neck, adjacent to the mane. The yellow lines, of the giraffe’s pattern, that reach the mane are coded according to the angle they make with the mane, starting at the head end. Three types of line are recognised, right-angled lines (R), acute-angled lines (A) and obtuse-angled lines (O). Obviously, each giraffe has two codes, one for the right-hand side of the neck, the other for the left. The right-hand code for the giraffe shown is ROAARAAROO. With three types of line (R, A and O) and 10 positions on the neck there are 310 permutations. This equals 59049. With both sides of the neck observed it would be 320 permutations or 3486784401. 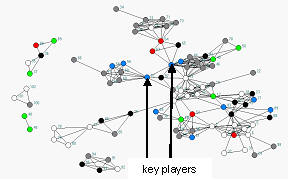 The network shown has been produced using the UCINET software to analyse 100 individuals observed on Mpala, in March/April 2005 (● = male, ● = female, ● = juvenile, ● = sub adult, ● = adult (unknown sex) and ° = unknown). On average a given individual is connected to approximately 5 others and any two giraffes can be connected, on average, via 3 others. The average clustering coefficient, C, measures the probability that any two of your neighbours in the network are themselves neighbours. It measure 'cliquishness' and lies in the range 0 > C < 1. In this network C was 0.89, and such a high value indicates a non-random structuring within the network. This type of network analysis will be important in predicting which individuals are key players (individuals connecting otherwise isolated subgroups) in reticulated giraffe populations. Such key individuals influence how ‘social information’ (involved with choosing a sexual partner, developing and maintaining cooperative relationships and engaging in foraging and anti-predator behaviour) and disease spreads through the population. 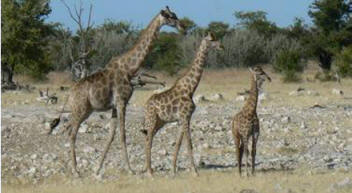 I am now looking at social networks in the southern giraffe, in Namibia (in association with Kerryn Carter and Anne Goldizen, of the University of Queensland, Australia). The primary objective of this study is to examine the fission-fusion social organisation of female giraffes in Etosha National Park, by studying the population’s social network and the factors that affect individuals’ choices of preferred associates. Etosha National Park is situated in northern Namibia and has held a protected status since 1907. The park covers an area of 22,270km2 and contains a large seasonally-inundated salt pan with a surface area of 4,590km2. The park contains eight broad plant communities and abundant plains wildlife. As in many African landscapes, during the dry season wildlife concentrates near perennial waterholes but during the wet season wildlife becomes more widely distributed. The study is being conducted in, but not confined to, the Okaukuejo area of the Park. The study area has been divided into four road transects, each of which can be fully explored by vehicle in half a day. Each transect includes ~50km of tourist roads plus a number of staff roads. A rotation of transects between morning and afternoon enables the study area to be completely surveyed within two days. Each transect is sampled every second day, which ensures independence of samples, as giraffe are expected to have adequate opportunity to change associates over a two day period. To reduce sampling bias, the direction of travel and the location on a transect where data collection commences is varied.

Vigilance and group size in impala, in Kenya 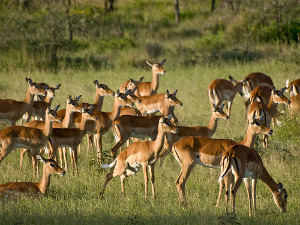 This was a past project that looked at the relationship between the amount of time spent being vigilant and the size of herds. The influence of sex, age, reproductive status, surrounding vegetation and the presence of heterospecifics on this relationship have also being investigated. One of the advantages of living in groups is that individuals may need to be less vigilant, allowing them more time for other important activities, such as foraging.

This relationship between group size and % time spent being vigilant was investigated by observing impala in Nairobi National Park, Kenya. Three types of individual were observed: females, territorial males and bachelor males. 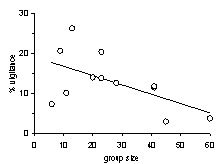 Only females showed the predicted negative relationship between % vigilance and herd size. Both types of male showed no significant change of vigilance with increasing group size. There was no difference in levels of vigilance in open or closed habitats and no difference in vigilance between herds 'alone' and herds with other species that might have provided 'extra eyes'. 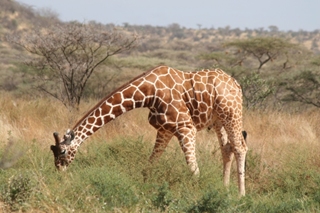 I am an advisor and collaborator for the Reticulated Giraffe Project in Samburu, Buffalo Springs & Shaba National Reserve, central Kenya. Behavioural and ecological components of the study are focused on the 600 square-kilometre Samburu, Buffalo Springs and Shaba complex of national reserves (the Samburu-Isiolo Conservation Area). Demographic data are being collected throughout the current range of the reticulated giraffes, from the Laikipia plateau in central Kenya north and east to the borders of Ethiopia and Somalia. Social network analysis will be coupled with analysis of DNA and reproductive hormones to interpret observed dispersion patterns; bioacoutics are being employed to investigate the possible use of infrasound as a medium of intraspecific communication; movements, behaviour, energy expenditure and environmental parameters will be measured by means of remote-sensing devices; and a combination of telemetry, direct sampling and a collaborative network of observers is being used to explore the demography of the population as a whole. The results are already informing the conservation and management of those reticulated giraffes that remain.

Shorrocks B (2012) Interspecific competition. In The Encyclopaedia of Biodiversity. 2nd edition, Academic Press.

Wragg F & Shorrocks B (2012) The relationship between size and abundance in bovid assemblages. (in prep.).

Shorrocks B (2012) Between Mount Kenya and the Rift Valley: the reality of conflict between livestock and wildlife in Laikipia, central Kenya. (in manuscript.).

Shorrocks B & Cokayne A (2005) Vigilance and group size in impala (Aepyceros melampus): a study in Nairobi National Park, Kenya. Journal of African Ecology, 43, 91-96. 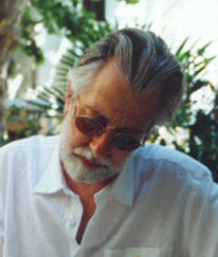