After undergraduate and graduate studies at Trinity College Dublin, the University of Bologna and the University of Oxford, and a year as College Lecturer in Old and Middle English at Brasenose College, Oxford, Kenneth Clarke spent four years in Cambridge as the Keith Sykes Research Fellow in Italian Studies, at Pembroke College, where he was also an Affiliated Lecturer in the Italian Department, Faculty of Medieval and Modern Languages. Part of his work has focused on the Italian sources of the fourteenth century English poet Geoffrey Chaucer. He is currently working on Boccaccio, as well as the fourteenth century commentary tradition on Dante's Comedìa.

Kenneth Clarke's interests are in late medieval Italian literature, in book production and circulation, eg how Boccaccio presents his own work in the surviving autographs. He's interested in the commentary tradition, glosses and marginalia, and is working on the fourteenth-century Florentine copy of the Decameron MS Plut. 42,1, with its scribal annotations. He's also interested in all aspects of the work of Dante, and in particular the flourishing of commentary material on the Comedìa appearing in the century or so after its author's death. 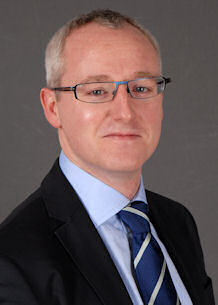