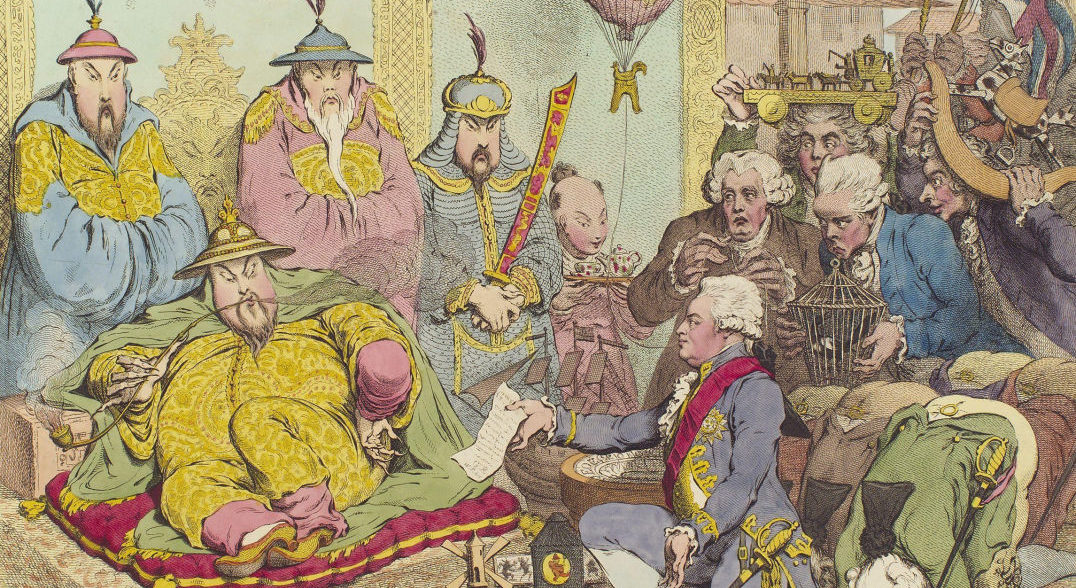 Jim's paper will be followed by a book launch reception for his book British Orientalisms, 1759–1835.

Much has been written about the Macartney embassy of 1792-4 to the Chinese imperial court, and it has often been argued that the nature of its rebuff generated retaliatory denigration of a Chinese empire caricatured as wilfully ignorant of European modernity. James Gillray’s print ‘The Reception of the Diplomatique & his Suite’ aside, however, few of the numerous satires of the embassy have received critical attention. This paper will discuss some of the irreverent and highly entertaining popular writing about the embassy that was produced between 1792 and 1805 – including, for example, Peter Pindar’s poem ‘To the Ship’ (actually written before Macartney departed), which imagines the ambassador and his party being caned by the Chinese emperor for their presumption. Some Britons may have vicariously experienced the failure of the embassy to impress the Qianlong emperor as a blow to their national pride, and the controversy regarding the ceremonial ritual of the ‘kowtow’ would certainly resonate in British culture for decades. Nonetheless, satirical accounts of the embassy tend to be less interested in any idea of Chinese intransigence than in the spectacle projected by the embassy itself, the apparent humiliation of which they generally present as borne by Macartney and his party alone. This paper will pay particular attention to the way in which comic representation of Macartney in this period draws upon languages of social as much as national difference. Diverse ephemeral works focus on the ambition and curiosity of Macartney, sometimes in the context of an established satirical tradition targeting the figure of the elite gentleman-traveller, but also sometimes more broadly with reference to the recent history of empire and Britain’s global designs. Above all, the satires of Macartney that I will discuss are reflexive, so that even those works which most directly associate China with customary practices coded as barbaric (such as the eating of dogs) at the same time exemplify an at once comic and critical engagement with the embassy, contesting its purpose, outcome, and significance.