Computational neuroscience uses mathematical analysis and modeling to advance our understanding of information processing in the human brain. Statistical signal processing methods, including Fourier, wavelet and Kalman filter based optimal spectral tracking techniques, have been developed and applied to brain signals. Modeling studies supplement this work, using detailed biophysical and phenomenological models. Application areas include neuroimaging, clinical studies and control of voluntary movements. Computational immunology is the application of computational modeling and simulation to address issues within experimental immunology. Our work focuses on the development of agent-based simulations of immune system function and we collaborate extensively with experimental immunologists at York and further afield in the USA, and have developed simulations for autoimmune diseases and early formation of immune organ function. We make use of extensive statistical analysis of our simulations, in an effort to increase confidence in the usefulness of the results when interpreted into an immunological context. 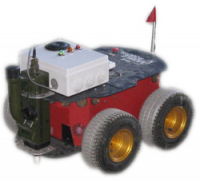 The Robotic Sniffer Dog project is a project funded by DSTL which attempts to improve the accuracy and reliability of automatic chemical agent detection using a robotic platform. The project was initial funded due to the success of the Receptor Density Algorithm (RDA), an immune-inspired algorithm developed by Dr. Nick Owens as part of his PhD research project, at detecting anomalies within a Proton-Transfer Reaction Mass Spectrometry data-set in a competition organised by DSTL at the ICARIS 2009 Conference. The RDA is inspired by the signalling mechansims found within T-cells, and is developed from models of the immunological T-cell and the T-cell recport's ability to contribute to T-cell discrimination.

Following the successful competition results seen by the RDA, DSTL funded three short work-periods with the goal of adapting the RDA to be used on an embedded robotic platform. The sensor used was a Smith's Detection CAM device, mounted on a Pioneer 4AT 4-wheeled robot. The platform was navigated across a noisy environment and successfully descriminated the target substance, aerosol-based Deep Heat, from a number of other VOCs.

Further work was then carried out which allows the automatic optimisation of RDA parameters for different sensors and environments, with efforts made to accelerate the process through the use of GPGPU acceleration using NVidia's CUDA programming language. Funding has now been allocated for a single 3-year PhD studentship to further the project, enhancing the algorithm and using new sensors and the group's new 4-wheel off-road Jaguar robotic platform.

Analysis and Inference of Brain Networks from Magnetoencephalographic Signals

Analysis and Inference of Brain Networks from Magnetoencephalographic Signals

The human brain is maybe the most fascinating and unknown organ in our body, it is composed of approximately 100 billion nerve cells, known as neurons, and each one is connected to other neurons through 10,000 synapses, forming a massive and efficient network capable of performing all cognitive functions and movement control.

During its evolution, the nervous system developed specialized neural circuits at different areas to optimize resources and data processing. Hence, different brain regions are in charge of one or several functions.  Although this statement can be argued due to the complexity, plasticity, interaction and continuous change of the brain network, it is well established that the brain works using regions with specialized neural architecture, which are in constant interaction and perform multitasking/parallel processing.

The understanding and study of the brain and its neural interactions have important applications apart from the desire of knowing how our brain works, some of these are:

By the study of these biological signals it is possible to infer the behaviour, communication, interaction and even physical connectivity of our nervous system. Some current well known techniques are correlation, partial correlation, coherence, partial coherence, direct transfer function (DTF) and partial directed coherence (PDC). 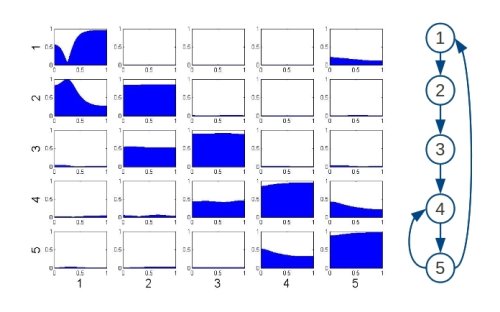 A nice introduction to these techniques and their applications can be found in videolectures.net/mda07_schloegl_eegc/.

The University of York has one of the finest equipments for magnetic brain mapping, a 4D Neuroimaging, whole head helmet and 248 sensors/channels MEG. We use the signals measured by the MEG to infer networks in the human brain cortex in a macro scale, studying the interactions among  brain cortex regions. For more information about MEG, visit the York Neuroimaging Centre (YNiC) webpages www.ynic.york.ac.uk/information/meg.

CoSMoS will comprise: a modelling and analysis process, based on computational concepts such as class, state, behaviour, and communication, and on complex system emergent properties, expressed in part as rich argumentation, modelling, analysis, and refactoring Pattern Languages; a massively parallel and distributed simulation environment, based on CSP and system modelling technologies that encompass a wide range of process granularities, targeted to the specific properties of complex systems: vast numbers of (relatively) simple agents interacting and communicating in parallel, in an (often stigmergic) environment.

The development of CoSMoS will be case study driven, to ensure that it contains the necessary generic components, and so that several iterations of the method and toolset, of increasing functionality and applicability, can be produced and validated.

The detailed project aims are: * to design pattern languages for: abstract computational representations suitable for modelling complex systems; analyses of their collective and emergent properties; refactorings, both of composed models, and for targetting simulations; argument structures, to reason about validity * systems, as instantiatable code frameworks in occam-π, Handel-C, and JCSP, targeting multiple processors * to bring these together in an integrated process, that guides the tasks of probing a complex system in order to build suitable abstract models (modelling pattern language), mapping a model to the simulation framework (refactoring pattern language), instantiating the framework to produce a simulation, arguing the validity of the simulation against the original system (argumentation pattern language), and using the simulation in a predictive manner (analysis pattern language) * to model and simulate a range of complex system case studies, both for driving the initial development and for performing the eventual validation of the entire CoSMoS process (modelling, mapping, instantiating, validating, predicting).

The field of Artificial Immune Systems (AIS) is a new and exciting area of research, whose implications to the design and implementations of systems in the future are manifold. This is not limited to the obvious virus detection in computer systems, but could extend from fault-tolerant hardware design to machine learning. However, to allow this new area to develop and for the UK to continue to lead the world in such activities, a more structured approach is needed to co-ordinate and support researchers in this area. This network is designed to help bolster these researchers in the UK, stimulate and extend the community of AIS practitioners within the UK, and provide the necessary infrastructure and financial support for them to pursue further interactions between themselves and international collaborators in order to drive forward this area of research.

BIASPROFS is a joint computing and biology research project with the aim of producing novel algorithms inspired by immunology for predicting the functions of GPCRs (G-protein-coupled receptors), an important kind of protein which interacts with many medical drugs. We are developing computational models of immunological processes that will ultimately lead to the development of novel immune inspired algorithms for the classification of GPCRs. This is in collaboration with University of Kent and University of Oxford (Jenner Institute for Vaccine Research).

The aim of nEUro-IT.net, the EU Neuro-IT Network of Excellence, is to build a critical mass of new interdisciplinary research excellence at the interface between neuroscience, information technology and engineering. As part of this initiative, we maintain a database of people, organisations, applications and funding opportunities within the nEUro-IT.net remit.