The Department will be very sad to learn of the death of Ken Dixon on 10 February, age 92.

Ken had a very distinguished business career. He was for many years the Chairman of Rowntree Mackintosh plc, York’s largest and most prestigious company and its largest employer. He was Chairman of the Joseph Rowntree Foundation, one of the UK’s most generous charitable foundations. He was also a former Vice-Chairman and Director of Legal & General Group, and former Deputy Chairman and Director of Bass. He joined the Council of the University in 1983, and on retirement from Rowntree, chaired the Council from 1990 to 2001. He was awarded an Honorary Degree by the University in 1993.

He has been a very good friend to the Department for twenty years. Having been extremely successful in business he was keen for the staff and students of the Department to expand their knowledge of business as well as economics. He therefore made a generous gift to the Department in 2004 to set up the annual Dixon lecture which has continued each year since, except for a break due to Covid. The aim of the lectures is for staff and students to engage with key national and international speakers, and for them to deliver a public lecture.

A full list of the Dixon lecturers may be found below. The first, given in 2004, was by Ed Balls, then an MP, Chief Economic Advisor to the Treasury and Chancellor Gordon Brown’s right-hand man. The lecture was a key statement of government policy with input from the Chancellor until just before the lecture was delivered. Subsequent lecturers have been either distinguished academics or key public officials, including the Axel Weber, Chairman of the Deutsche Bundesbank and UBS, Robert Chote, Chairman of the Office of Budget Responsibility, members of Monetary Policy Committee and Martin Wolf, Chief Economic writer for the Financial Times.

In his business life one of Ken’s proudest achievements was the creation of Rowntree’s After Eight chocolate. He explained to me in great detail, and with much enthusiasm, the complexities involved in the research needed to make a chocolate with such properties, the economic problems such as those of buying the ingredients in forward and spot commodity markets, and the marketing problems that were entailed. It made me realise the considerable intellectual demands of business.

Ken read economics at the University of Manchester. A professor he often mentioned as a big influence was Arthur Lewis, the distinguished Barbadian development economist.  I always thought that Ken was at heart an academic. He showed this in his University counsels where he was renowned for his wise advice. He promoted teaching and research over excessive and intrusive administration. As well as Economics, he supported activities in the arts departments of the University.

Those who met Ken will remember him as a charming, friendly and very sharp, ready to challenge ideas and usually asking the first question of the Dixon lecturer. He liked nothing better than to engage in discussion with staff and students. We will miss him and his enthusiasm for economics, the Department and the University of York. Our thoughts go to his wife Pat who fully supported his links with the Department and attended all the lectures. 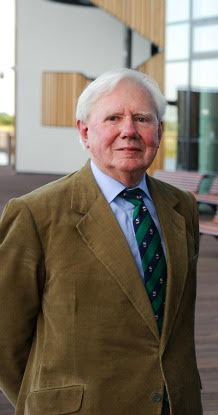