Carbon dioxide is the most abundant form of carbon on planet Earth and as such is a highly attractive feedstock for a sustainable chemicals industry. However, waste carbon dioxide is produced as an impure mixture with other gases and must be captured and separated from them prior to its use. Achieving this in an energy efficient manner is a major challenge and one of the most attractive options is the use of solid materials to selectively physisorb carbon dioxide. The solid adsorbent needs to be available at low cost and on a large scale. Conventional (microporous) activated carbon has been widely investigated for this application. However, in a major breakthrough, we have shown in collaboration with Professor James Clark that mesoporous carbons obtained from waste biomass (potato peel or seaweed) and referred to as Starbons® significantly outperform activated carbon both in terms of amount of carbon dioxide they adsorb and the selectivity for carbon dioxide over nitrogen. The materials are also relatively unaffected by water vapour. In the graph shown above, AC is commercial activated carbon, S refers to Starbons® derived from starch, A to Starbons® derived from alginic acid and the number to the temperature at which the Starbon® was pyrolysed. Ongoing work is focussed on modifying the structure of the Starbon® material to further enhance their carbon dioxide capture properties and attaching catalysts onto the Starbon® to allow the carbon dioxide to be both captured and converted into a valuable chemical.

Having captured carbon dioxide, the next challenge is to convert it into chemicals for which there is large scale demand and to do so in an energy efficient manner. Our previous work has led to the development of catalysts (such as the bimetallic aluminium(salen) complex shown above) which will convert carbon dioxide and epoxides into cyclic carbonates at room temperature and atmospheric pressure. Cyclic carbonates are commercially important as they are the electrolytes used in lithium ion batteries which power everything from mobile phones and laptops to electric cars. We are currently working on the development of even more active catalysts, on understanding the mechanism of this transformation and on expanding the range of epoxide substrates. Current work is focussed on much simpler catalysts which do not require a metal as part of their structure and which do not require any halide salts either within the catalyst or as a cocatalyst.‌

One of the reasons we are interested in cyclic carbonates is that they make excellent, green, polar aprotic solvents and are direct replacements for solvents such as DMF and DMSO. We have already shown that cyclic carbonates can be used as solvents for organocatalysed asymmetric aldol reactions and related processes using natural amino acids as the catalyst. The availability of enantiomerically pure cyclic carbonates also provides an opportunity to investigate chiral solvent effects in asymmetric catalysis which is another area we are interested in. We are now investigating the use of cyclic carbonates as green solvents in other areas including peptide synthesis and as solvents for solid supported synthesis (the latter in collaboration with Dr Anne Routledge). The graph above illustrates how the ChemMatrix resin will swell in a range of green (and not so green solvents). A swelling of at least 4mL g-1 is considered appropriate for use of the resin in solid supported synthesis. 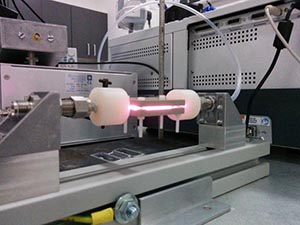