Chemists at the University of York played a pivotal role in new research that has signalled a significant step forward in the understanding of how insulin works. 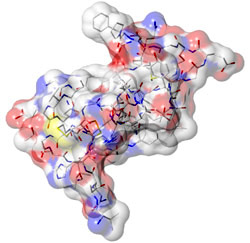 Chemists in the York Structural Biology Laboratory (YSBL) in the University’s Department of Chemistry are part of an international team that has established the first three-dimensional insight into the complex way the insulin hormone binds to its receptor on cell surfaces. The study is published in Nature, 90 years after the discovery of insulin and 43 years after determination of the crystal structure of the hormone by Dorothy C. Hodgkin.

This first demonstration of insulin/insulin-receptor interaction will potentially assist insulin modification to develop more effective hormone therapies for treating diabetes, a disease which is a growing burden in both developed and developing societies. It could also provide greater understanding of the role closely-related Insulin-like Growth Factor system plays in cell growth and cancers.

The research also involved scientists from the Walter and Eliza Hall Institute of Medical Research (WEHI), La Trobe University and University of Melbourne, Australia; Case Western Reserve University, Cleveland, Ohio, and the University of Chicago, USA and the Institute of Organic Chemistry and Biochemistry (IOCB), Academy of Sciences of the Czech Republic in Prague.

YSBL and the Institute of Organic Chemistry and Biochemistry, Academy of Sciences of the Czech Republic created super-active insulins to aid the research team’s understanding of how insulin binds to the receptor.

Dr Marek Brzozowski, of the YSBL, said: “Our paper provides landmark, three-dimensional description of the way in which key molecules within these systems interact to initiate insulin signaling events. These findings show the power of structural biology to visualize such fundamental biological processes. Our manuscript provides long-sought insights into the structural biology of a major human endocrine system.

“The success of this study highlights the power of an interdisciplinary and collaborative team approach to an otherwise intractable problem. The discovery and the first clinical use of insulin in Toronto in 1922 represent a historic landmark in the advent of molecular medicine. We believe that the present study, providing the first glimpse of the hormone-receptor complex, represents a major milestone on this, the 90th anniversary of the Toronto discovery.”

The study, which bridged three generations, benefited from the insight of three retired distinguished scientists: Colin Ward in Melbourne (pioneer of the structural biology of insulin receptor), Guy Dodson in York (a student and member of the group of the late Dorothy C. Hodgkin, with seminal contributions to the classical crystal structure of insulin), and Don Steiner in Chicago (discoverer of proinsulin and of related genetic syndromes of diabetes).

The groups of Dr Jiri Jiracek, from IOCB, and Professor Mike Lawrence, from WEHI, are also members of new, large research programme on insulin and Insulin-like-Growth-Factor systems, which is funded by the Medical Research Council and co-ordinated by Dr Brzozowski.

This paper is dedicated to the late Professor Guy Dodson, in recognition of his inspirational and lifetime contribution to the study of the structure of insulin.