Cracking cellulose: a step into the biofuels future

Scientists from the University of York have played a pivotal role in a discovery which could finally unlock the full potential of waste plant matter to replace oil as a fuel source. 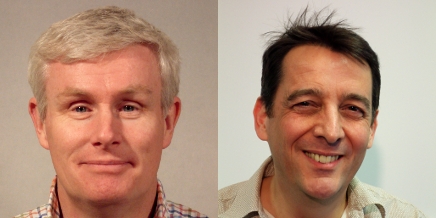 Professor Paul Walton and Professor Gideon Davies, of the University’s Department of Chemistry, were part of an international team that has found a method to overcome the chemical intractability of cellulose, thus allowing it to be converted efficiently into bioethanol.

Working with scientists in Novozymes laboratories at Davis, California, and Bagsvaerd, Denmark, as well as researchers at the University of Copenhagen and the University of Cambridge, they identified the molecular mechanism behind an enzyme found in fungi which can degrade the cellulose chains of plant cell walls to release shorter sugars for biofuels.

This represents a major breakthrough as cellulose is the world’s most abundant biopolymer. Global generation of cellulose is equivalent in energy to 670 billion barrels of oil – some 20 times the current annual global oil consumption. The discovery opens the way for the industrial production of fuels and chemicals from plentiful and renewable cellulose in waste plant matter.

The research, which is published in the Proceedings of the National Academy of Sciences (PNAS), removes the major constraint on the production of bioethanol from cellulose the stability of which had previously thwarted previous efforts to make effective use of it for biofuels.

The researchers found a way of initiating effective oxidative degeneration of cellulose using the copper-dependent TaGH61 enzyme to overcome the chemical inertness of the material.

Professor Davies, much of whose work on plant cell-wall degradation is funded by the Biotechnology and Biological Sciences Research Council, said: “Cracking cellulose represents one of the principal industrial and biotechnological challenges of the 21st century. Industrial production of fuels and chemicals from this plentiful and renewable resource holds the potential to displace petroleum-based sources, thus reducing the associated economic and environmental costs of oil and gas production. Events at Fukushima and the continuing instability in major oil producing countries only highlight the need for a balanced energy portfolio.”

Professor Walton added: “This discovery opens up a major avenue in the continuing search for environmentally friendly and secure energy. The potential of bioethanol to make a major contribution to sustainable energy really now is a reality.”

Claus Crone Fuglsang, Managing Director at Novozymes’ research labs in Davis, California said: “Scientists have worked to figure out how to break down plant matter for the past 50-60 years. The impressive effect of GH61 was established a few years back and today it is a key feature of our Cellic CTec products.

“Fully understanding the mechanism behind GH61 is important in the context of commercial production of biofuel from plant waste and a true scientific paradigm shift. This discovery will continue to drive advances in production of other biobased chemicals and materials in the future.”

Leila Lo Leggio, Group Leader of the Biophysical Chemistry Group at the Department of Chemistry, University of Copenhagen, said: "As a team of academic scientists, it is particularly rewarding when our basic research in the three-dimensional structure and chemistry of proteins also contributes to possible solutions for one of the major challenges our society is facing.”

Professor Paul Dupree of the University of Cambridge Bioenergy Initiative and Director of the BBSRC Sustainable Bioenergy Cell Wall Sugars programme, said "Understanding the GH61 enzyme activity is one of the most significant recent advances in the area of biomass deconstruction and release of cell wall sugars."