During his final year, Khoa Chung, an MChem (Industry) undergraduate student, has been involved in a project at the John Innes Centre, which is now published in Science magazine. 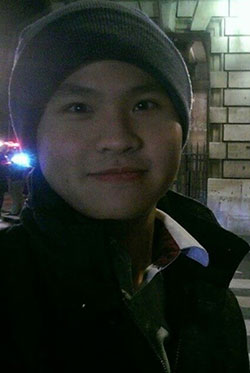 The project aimed to understand the biosynthesis of vinblastine, a potent but rare anti-cancer drug. This valuable natural product, has been used as an anti-cancer drug since it was discovered in the 1950s. Found in the leaves of Madagascar periwinkle (Catharanthus roseus), it is a potent inhibitor of cell division and is used against lymphomas and testicular, breast, bladder and lung cancers. It is one of the most structurally complex medicinally-active natural products found in plants.

However, access to its life-extending chemistry has been very laborious. It takes approximately 500 kilograms of dried leaves to produce just 1 gram of the active drug.
Professor Sarah O'Connor's team at the John Innes Centre in Norwich used modern genome sequencing techniques to identify the key missing enzymes that build vinblastine precursor molecules catharansine and tabersonine. These precursors can be modified further using known biosynthetic methods and ultimately give vinblastine itself.

During his MChem (Industry) project in Professor O’Connor’s lab, York undergraduate Khoa Chung made important contributions to the work by performing a semi-synthetic study that directly contributed to the identification of the missing enzymes. Key intermediates were synthesised and then tested as substrates for the candidate missing enzymes, demonstrating that they functioned in the expected way.

"Coming to the John Innes Centre, I did not know what to expect, as it is a plant-based research institute – I was initially sceptical about how I could contribute with my chemical background. However, I quickly came to learn that the underpinning theme within Sarah’s group is its interdisciplinary nature; I believe it is this collaborative and multi-faceted approach which enabled completion of the vinblastine biosynthesis.”

On first arriving for his placement at the John Innes Centre, Khoa was mentored in Professor O’Connor’s team by senior post-doc Jakob Franke. He then moved on to take up a independent academic position and it was Khoa’s job to complete the synthetic work.

“The compounds that Khoa made were absolutely essential for testing of the enzymes and understanding the reactivity of these unusual compounds. The whole team is very grateful that we had Khoa in the lab at exactly the right time!”

The more detailed understanding of the biosynthesis achieved by the team of researchers should ultimately allow vinblastine to be more easily produced in greater quantities by engineering the genes into convenient hosts such as yeast.

The research is published in Science.