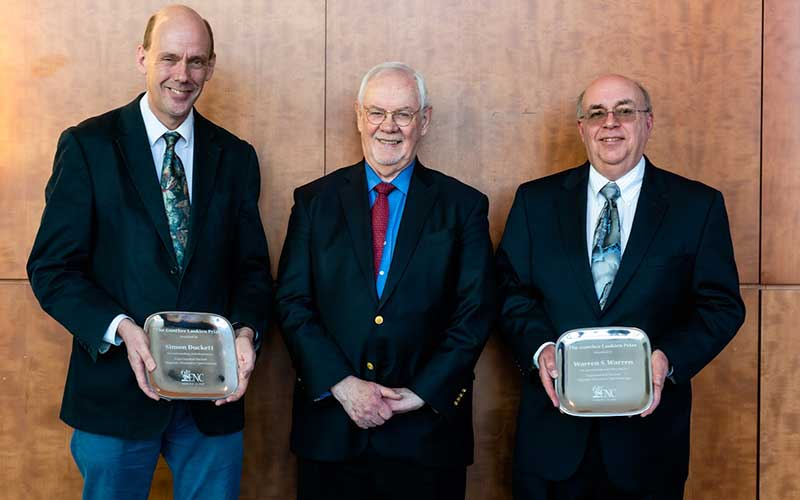 Professor Simon Duckett has been recognised for his pioneering research on developing methods to dramatically improve the quality of pictures associated with medical imaging, helping to fight diseases like cancer.

Researchers hope that in the future, doctors will be able to accurately make diagnoses in minutes from advanced MRI scans. Currently this takes days, weeks and sometimes months to implement.

The underpinning technique, which is known as Signal Amplification by Reversible Exchange (SABRE), has been developed by scientists at York since 2013.

It works by magnetically labelling drugs or substances that occur naturally in the body, without changing their molecular structure, making the method very safe and versatile.

Professor Duckett, Director at the Centre for Hyperpolarisation in Magnetic Resonance (CHyM) at the University of York, is a joint winner of the prize along with Konstantin Ivanov (Novosibirsk State University) and Warren S. Warren (Duke University).

The prize carries a monetary award of $20,000 which will be divided equally among the three awardees.
The prize was officially presented to Professor Duckett at the Experimental Nuclear Magnetic Resonance Conference in Baltimore in March.

Professor Duckett said: “I am thrilled to receive this award, it is a huge honour. This area of science has developed substantially since it was first described in Science in 2009 by researchers in York and led to the York Centre for Hyperpolarisation in Magnetic resonance being established in 2013.
“The impact of SABRE is expected to grow over the coming years. One area of on-going research
in CHyM seeks to harness SABRE to transform the ability of magnetic resonance imaging (MRI) to diagnose disease.”

Professor Duncan Bruce, Head of the Department of Chemistry, said: “I am delighted to see Simon’s transformative work recognised in this way. The methods developed by Simon and his co-workers have opened up so many new avenues and possibilities from the chemistry laboratory right through to the clinic and, even though now we can see some of the impacts of his pioneering work, they will continue to emerge for many years to come.”

The Laukien Prize was established in 1999 to honour the memory of Professor Gunther Laukien, a co-founder of Bruker. The prize is intended to recognize cutting-edge experimental NMR research with a high probability of enabling beneficial new applications.