A £1.4m grant has been awarded by the Engineering and Physical Sciences Research Council (EPSRC) to support an international research network led by Dr John Slattery (University of York) and Professor Ken McKendrick (Heriot-Watt University), who will explore the surface structure and catalytic performance of ionic liquids. 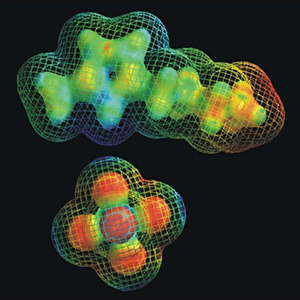 Molecular model of an IL showing a
positively-charged "cation" (top) and a
negatively charged "anion" (bottom)
that in combination make a salt with a
low melting temperature.

Ionic liquids (ILs) are salts with low melting temperatures that, unlike most salts, are typically liquid at room temperature. They have been of considerable interest in recent years due to their unique combination of properties, including low vapour pressures, inherent conductivity, ability to dissolve a range of solutes of differing polarity, and the fact they often have high chemical and thermal stability. This allows them to find applications in many areas, including in sustainable chemistry and catalysis, carbon capture and storage (CCS), solar cells, supercapacitors and more. In many applications of ILs, their surface structure plays a vital role and so obtaining a fundamental understanding of IL surfaces is vital for their rational design and optimisation.

The team has previously focused on studying the surface and bulk structure and behaviour of a wide range of ILs using several complementary techniques. This major EPSRC grant will allow them to use their collective expertise to develop new methods for studying the surfaces of IL mixtures to enable their use as components of industrially focused catalytic systems. By making mixtures, their properties can be 'tuned' selectively to deliver enhanced performance, enabling catalysts to be more selective and longer-lived. Collaboration with Professor Peter Wasserscheid and Dr Marco Haumann, from Friedrich-Alexander Universität Erlangen-Nürnberg, and the UK Catalysis Hub will allow catalytic testing and facilitate interactions with potential end users of the technology.