Enhancing the visualisation of aromatic molecules

A computational method developed in York provides an easy way of visualising the aromaticity of important polycyclic aromatic hydrocarbon molecules and gives new insights into their bonding. 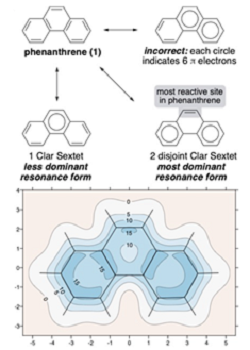 (Top) Structure of phenanthrene drawn in the traditional way showing Clar sextets both correctly and incorrectly. (Bottom) The magnetic shielding map provides an intuitive way to understand aromaticity – in this case phenanthrene is shown and the darker blue indicates greater aromaticity, indicating that the terminal rings are more aromatic than the central one.

Dr Peter Karadakov from the Department of Chemistry here in York, working with Professor Brett VanVeller and Bryan Lampkin from Iowa State University in the USA have developed a method to create a better visualisation of aromaticity in polycyclic systems.

Aromaticity is a fuzzy concept, with the International Union of Pure and Applied Chemistry (IUPAC) defining an aromatic molecule as one that has ‘a chemistry typified by benzene’ – a definition that’s not particularly helpful when it comes to identifying aromaticity. Chemists often use simple qualitative rules such as Hückel’s (4n + 2) electron-counting rule.

However, for polycyclic aromatic hydrocarbons (PAHs) such as phenanthrene which have multiple fused rings it’s not sufficient to know whether the molecule is overall aromatic – the individual rings have varying degrees of aromatic character. Understanding the  bonding and behaviour of PAHs is of great significance in part because they are environmental pollutants but also because they are abundant in the universe and it has been suggested they may have played a critical role in the origins of life.

Clar’s sextet rule states that a molecule’s dominant resonance structure is the one with the largest number of disjointed aromatic π-electron sextets. Clar sextets can be depicted by a circle drawn inside a benzene hexagon. Yet there’s still a lot of confusion around Clar’s rule, with many people simply incorrectly drawing a circle in all of the rings with any aromatic character.

In order to better visualise aromaticity in polycyclic systems the researchers created isotropic magnetic shielding (IMS) plots, which provide an intuitive picture of aromaticity – both overall and local. “Pictures are remarkably powerful - as soon as you see them, you can immediately start interpreting them” says Dr Karadakov. In phenanthrene for example the picture clearly shows that the terminal rings are darker in colour, therefore more aromatic, than the central ring – as is predicted by Clar's sextet rule.

On their new visualisation technique, Professor VanVeller explains: “We can replicate Clar’s rule when it is accurate, but importantly, we can go beyond it when it’s inaccurate.” For example the molecule coronene cannot be drawn with a single static representation that encompasses all of its resonance forms, but the new contour plots showed immediately that all of coronene’s outer rings are equally aromatic.

Isotropic magnetic shielding - the method used by the researchers to create the plots - is essentially the same magnetic shielding that influences chemical shift in nuclear magnetic resonance spectroscopy. But while NMR shifts are centred around an atom, IMS indicates what’s happening between atoms, and hence provides insight into the bonding in such molecules. “The only drawback is that to obtain all this information, we need to do a lot of computational work” says Dr Karadakov.

Dr Karadakov and his co-workers are now developing a tutorial so other chemists can create their own aromaticity maps and hope that such plots may in the future enhance the intuitive understanding of these important molecules, find their way into textbooks and hopefully help avoid future aromaticity drawing disasters.

The research is published in Angewandte Chemie