Genetic information from an 800,000-year-old human fossil tooth has been retrieved for the first time. 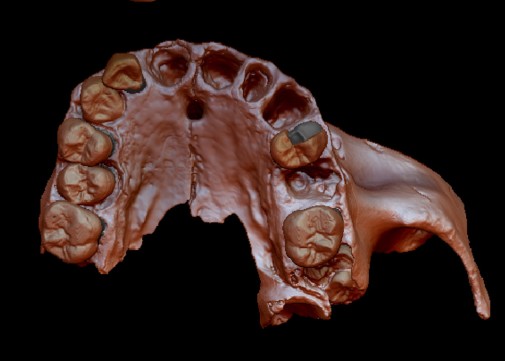 This has enabled scientists to trace the human family tree further back than ever before - and settle a long-standing evolutionary debate.

The study – including academics from the University of York - retrieved the oldest human genetic data set from a tooth found in Spain belonging to the species Homo antecessor.

Dr Marc Dickinson and Dr Kirsty Penkman from the Department of Chemistry analysed ancient proteins to determine if the protein was original.

In this study the Copenhagen team analysed tooth enamel belonging to two hominin species, one 800,000-year-old (Homo antecessor), and one 1.77-million years old (Homo erectus). However, it proved very challenging to get protein sequence information from the older Homo erectus sample, so the York team used their expertise in analysing ancient proteins to determine if the protein was original.

Using the predictable degradation pathways of amino acids and proteins, Dr Marc Dickinson and Dr Kirsty Penkman determined that the proteins present in the Homo erectus enamel were original, but showed very high levels of degradation.

A protein sequence is made up of a chain of amino acids; the order of these amino acids in the chain enables evolutionary relationships to be unpicked. Unfortunately many of the links between the amino acids were broken down in the Homo erectus sample, meaning that much of the sequence information had been lost. However, this data helps to validate the proteomics sequence data generated by the Copenhagen team.

Dr Marc Dickinson said: “Finding original organic material, which has survived for millions of years is fascinating. It is incredible that these samples are still able to provide scientific information so long after their creation.”

The human and the chimpanzee lineages split from each other about 7-9 million years ago. But scientists have wanted to better understand the evolutionary relations between our species and the others, all now extinct, in the human lineage.

Recent studies confirmed that the facial features of Homo antecessor are very similar to those of Homo sapiens (us) and very different from those of the Neanderthals and their more recent ancestors.

The analysis of these ancient proteins from the 800,000 year-old-tooth provides further evidence that there was a close relationship between Homo antecessor and us (Homo sapiens).

“Our results support the idea that Homo antecessor was a sister group to the group containing Homo sapiens, Neanderthals, and Denisovans.”

Because of the chemical degradation of DNA over time, the oldest human DNA retrieved so far is dated at no more than approximately 400,000 years. But the analysis of ancient proteins with mass spectrometry, an approach commonly known as palaeoproteomics has enabled scientists to overcome these limits.