Professor Jane Thomas-Oates and Dr Alison Parkin have recently both been recognised with two separate awards for their high quality research, which uses key analytical methods to shed light on important chemical and biological processes. 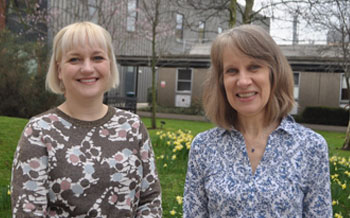 Professor Jane Thomas-Oates has been named as the British Mass Spectrometry Society Lecturer for 2019. This Lectureship is awarded every three years to someone who has made significant contributions to research involving mass spectrometry. During the three year tenure of the award, Jane will deliver around 10 lectures at conferences, departmental seminars and to the general public, highlighting different aspects of the subject as exemplified by her work.

The research of Jane’s team is focussed on the structural analysis of biologically-active molecules. Using mass spectrometric methods, they are characterising systems as diverse as biomolecules from archaeological samples, the metabolism of arsenic-containing compounds, and the signal molecules involved in nitrogen fixing plants.

Dr Alison Parkin has been awarded the inaugural Roger Parsons Medal of the Royal Society of Chemistry Electrochemistry Group. The Medal is presented to an independent early career electrochemist working in the UK or Ireland in recognition of their contributions to any field of electrochemistry. The Medal will be presented at the annual UK ‘Electrochem’ Meeting at Strathclyde in August, at which Alison will also deliver a Plenary Lecture.

Alison’s team use electrochemical methods to understand how transition metals in proteins activate chemical reactions that are essential for life. Understanding such processes is fundamentally important, and can also underpin the development of new antibiotics to halt the rise in drug-resistant pathogens, help design better industrial catalysts, and offer new solutions to environmental problems.

The Department of Chemistry is one of the leading UK chemistry departments, and is recognised for its high quality research and teaching. In particular, the department is highly regarded for the ways in which it supports the careers of women in science, and was the first UK department to receive the Athena SWAN gold award, which it has held for more than 10 consecutive years.