Mark Sculpher presented at the Policy Forum and Workshop, at the University of Adelaide Australian ISPOR Chapter in Sydney on 8 December. He also participated in a 3-day modelling workshop in Sydney, also organised by the ISPOR Australian Chapter.

Andrew Mirelman presented a seminar ‘Accounting for equity in the assessment of fiscal policies for health’ on 20 December in Japan at the Hitotsubashi University. Where he also taught a course ‘Issues in Health Financing in Low and Middle Income Countries’ for the MSc in Health Economics.

Idaira Rodriguez Santana and Martin Chalkey presented ‘Choice of medical specialty and demographics - Economic implications’ at the DREAMS workshop 3: Economics of Selection which took place in December at the University of York.

Richard Cookson, Susan Griffin, James Love-Koh, Ieva Skarda and Tony Culyer attended a workshop at the Brocher Foundation in Geneva 13-16 November, to discuss the development of a book on equity informative economic evaluation.

Mike Drummond delivered the 2017 Sir John Monash Lecture at Monash University (Malaysia) on 17 November, in Kuala Lumpur. The title of the lecture was 'Financial sustainability of health care in Europe: brexit boom or brexit bust?’ He also discussed the contribution of the UK to health technology assessment in Europe and how this might be impacted by the UK leaving the European Union.

Adriana Castelli was part of a panel of experts at the Festival of Economics in Bristol, 18 November. Presenting, ‘The end of the NHS? Not with a bang but with a whimper’. 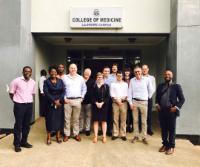 Paul Revill, Alex Rollinger, Martin Chalkley and Mark Sculpher organised and attended the launch of the new Thanzi la Onse (Health of All) programme, 27-30 November in Lilongwe, Malawi. The event was attended by local policy makers from the Ministry of Health, as well as representatives from local stakeholder organisations and research groups and included UK partners from UCL, Imperial and ODI. The CHE team also visited the College of Medicine Lilongwe campus to meet with researchers and view the offices set aside to house the Thanzi la Onse Malawi team.

Maria Goddard gave a presentation about CHE's history and current research work to a group of 20 senior staff visiting York from the University of Bergen, Norway on 28 November. The group comprised Deans, Rectors and Vice Rectors from across the University who were interested in hearing about how to establish and grow a successful research group.

Mike Drummond gave the Keynote Address in the Plenary session, speaking on 'Adoption and Uptake of Biosimilars: European vs. US Experiences' at the Western Pharmacoeconomics & Outcomes Research Conference held in Albuquerque, New Mexico, 4-6 October.

Rita Santos, Mark Sculpher and Paul Revill organised and spoke at a 1-day workshop on the "Economics of Leishmaniasis" held at the Principal Hotel, York, 17 October. It was organized in collaboration with UoY Department of Biology and had participants from across the UK, Netherlands, Switzerland and Sri Lanka.

Helen Weatherly presented ‘Economic evaluations of social care interventions: are we all on the same page?’ at the 8th international conference for EBHC, The ecosystem of evidence, which took place in Taormina, Italy, 27 October.