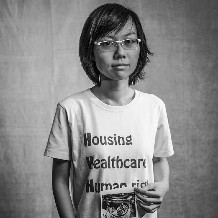 Join us for the launch of visiting Fellow Han Hui Hui's book, #YearningForJustice : A mother's musings to her future child. At the launch we will also hear from guest speaker Leong Sze Hian.

Singaporean human rights defender Han Hui Hui started blogging in 2007. Within a decade, blogging led her to vlogging, making YouTube videos, meeting people in public, being part of public gatherings, being interrogated by the Singapore police, charged in court by the Attorney-General's Chambers, fined by the authorities, imprisoned by the establishment, and deported by Malaysian immigration authorities back to Singapore by demand of the Singapore government in 2017. Hui Hui grew up in the public eye, from a secondary school student blogger in 2007, to a human rights defender facing the threat of a jail sentence of 18 years and a fine of SGD$600,000 in 2017 as a result of her human rights work.

In 2018, Hui Hui was nominated by the International Federation for Human Rights for the Protective Fellowship Scheme at the University of York. The pride and gratitude at being the first Singaporean fellow to be hosted under the Scheme at York was immense. The successful nomination has resulted in Hui Hui's exposure to new experiences that most Singaporeans will never have in their entire life; just like the Swiss standard of living that was promised to Singaporeans by the Singapore government, or the incumbent ruling party implementing a system that will protect the housing, healthcare and retirement of Singaporeans.

Hui Hui's journey and experience on the Protective Fellowship Scheme has been made even more special by the fact that she will become a mother this year in 2019 at the age of 27. Being on the Fellowship alongside other human rights defenders and Masters students in York - the UK's first human rights city - has allowed Hui Hui to undergo pregnancy in a country where one doesn't have to worry about the same human rights issues which Hui Hui campaigns for tirelessly in Singapore.

Throughout her time on the Fellowship, Hui Hui has documented the human rights situation in Singapore in the 2010s in a letter to her future child. The letter will be published as a book by the Centre for Applied Human Rights at the University of York.