Sherif Azer is an Egyptian human rights activist/defender. He received his BA from the American University in Cairo (AUC) in 2004 in Political Science and a Master’s degree from AUC in International Human Rights Law in 2009. His MA thesis, entitled "Cyberactivism in Egypt: A New Social Movement", studied the cyberactivism phenomenon from a human rights and sociological perspective in Egypt at an early stage. This research gave him a strong understanding of cyberactivism in Egypt; during this time he participated in a number of different events, conducted interviews and produced a number of publications, including a guide to blogging. Sherif published a book in 2012, reporting on the results of his research.

Sherif has worked in the human rights field for eleven years, beginning as a volunteer at the Egyptian Organization for Human Rights in 2003. He held a number of positions in the organization and became the Assistant Secretary General in 2011, a position he continues to hold. Sherif was also the Middle East and North Africa Protection Coordinator of Front Line Defenders, an international organization based in Dublin with the specific aim of protecting human rights defenders at risk. The focus of his work was to provide protection to human rights defenders in the MENA region through international lobbying, security grants and security trainings, as well as other activities. During the years 2006- 2012 Sherif also worked for the International Network for Freedom of Expression (IFEX) as the MENA Coordinator.

Sherif is supervised by Martin Jones. 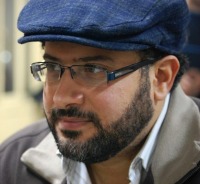