The will of Ursula Simpson

In October 1640 Ursula Simpson, a widow from Garton in Yorkshire, being ill, made her will. In it she made bequests to her children, Thomas and Ellen, to Richard Tenney, a local clerk,to preach a funeral sermon for her and to his daughter, Elizabeth, as well as to her cousins Elizabeth Pollard and Barbara Muston, and to a brother and sister, William and Elizabeth Lambe and to another member of the Lambe family, Ann. Unusually she also made a bequest to her father - of a suit of clothes once belonging to her husband and to her mother – of a black mourning gown and a petticoat and hat. Her daughter was appointed to be her executor with her father and Henry Best as supervisors. The will is typical of women's wills at this date. These were usually made by widows or single women as married women required their husbands' permission to make a will and may, in any case, have had little to leave. These women's wills often make bequests of clothing as Ursula Simpson does: as well as the bequests to her parents mentioned above she leaves two old gowns to her cousin Barbara and a cloth gown with silver lace to her cousin Elizabeth. Ursula also made bequests in money of quite large amounts - £100 to each of her children – suggesting she was quite wealthy, and left a number of ewes and lambs to individuals. 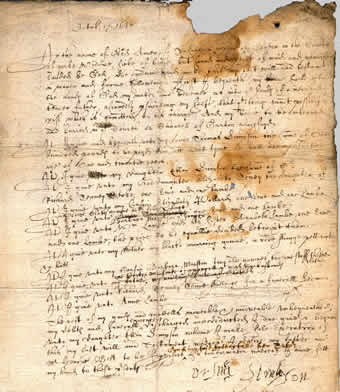 ‌
(Click the image for a larger version and modern transcription)

Ursula's concern about her illness was clearly justified: in November an inventory was drawn up of her goods 'moveable and unmoveable'. Inventories were intended to be displayed in court with the will when the Church granted probate of the will. This inventory includes an appraisal of the value of Ursula's clothes and wedding ring and then lists her belongings by room. In the hall, for example, a value is put on a 'corslet furnished' (that is, a suit of armour); in the parlour is £16 worth of wool and the value of goods in the kitchen, the middle chamber, the maid's chamber, the other chamber and the best chamber (all bedrooms) are also noted as well as the livestock Ursula owned – not just the sheep and lambs mentioned in the will (of which she had 15 score that is 300) but oxen, pigs and poultry. She also had crops stored and farm implements such as ploughs – all these demonstrate how she earned her keep. There is also a note of debts owed. 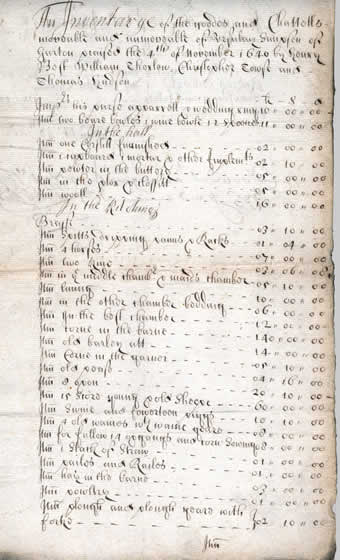 When probate was granted in February 1641 Ellen Simpson was still a minor and could not, therefore act as executrix in her own right. The administration of the estate was granted to Anne Simpson widow – presumably another of Ursula's relatives.

Interestingly it's recorded that no inventory was exhibited, although it is clear that one had been drawn up by this time.

Very often probate information stops at this date – but in this case the probate accounts Anne Simpson drew up whilst administering the account (and which she had to produce before the court to prove she had administered Ursula's goods honestly) also survive. 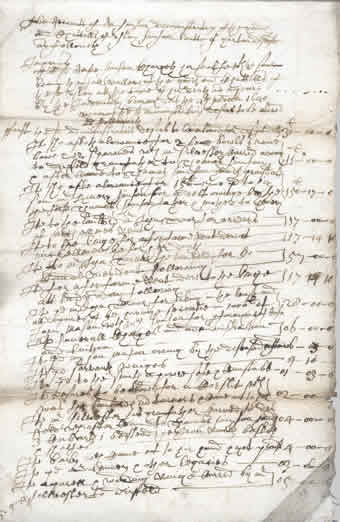 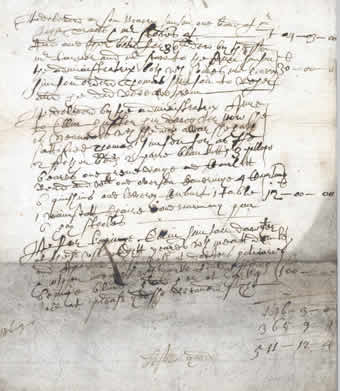 These demonstrate the difficulty that there could be in administering an estate – and also the possibly misleading statements in inventories. The accounts note that the suit of armour, for example, mentioned as in Ursula's hall actually belongs to her landlord, and that some of the barley appraised in the inventory actually 'came not to her hand'. Anne also notes that some of the spoons and bowls Ursula owned had already been taken away. They also detail Ursula's quarterly rent, the servant's wages that were owed at her death and other debts which needed to be paid and the varying values and prices put on objects. In the inventory Ursula's clothes, purse and wedding ring were valued at £10, Anne eventually received £5 for them (although this may take into account the fact that some clothes had been individual bequests and were not actually sold).

A final interesting insight into the Simpson family is the money paid for keeping Ellen Simpson (Ursula's daughter) fed and clothed for eight years at York and for the costs of doctors and apothecaries to treat her blindness 'till it please God she recovered her sight'.