Georgiana Grey was the daughter of Charles Grey, second Earl Grey and prime minister of England. Georgiana's sister Mary married into the Woods, later earls of Halifax and amongst the Wood family papers are a number of letters to and from Georgiana offering evidence of her relationshiops with her family and friends. One of these friends was Frances Kemble (later Mrs Butler) the famous nineteenth-century actress.

The first reference to Frances Kemble appears in a letter from Lord Grey to his daughter in March 1830. Georgiana has seen Miss Kemble appear as Mrs Beverley in The Gamesters (a popular drama of the time about Mr Beverley, a gambler, who is led astray by one Stukeley and who dies a miserable death). Lord Grey reminisces about the other great actresses he has seen in this role: Sarah Siddons and Miss O'Neill. 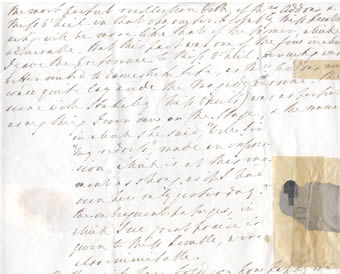 This was one of Frances Kemble's very first leading roles on the stage, in her father's theatre. She was to go on to write plays, poetry and memoirs, to marry and travel to America, to divorce and return to England and to protest against slavery as she witnessed it on her husband's estates in Georgia. She knew everyone of note in London, and was to become a friend of Georgiana Grey's. Her first surviving letters to Georgiana are from 1842 and are formal, concerning invitations to visit, which she is obliged to refuse because of her imminent return to America. Later letters, however, reveal that the two were good friends. Frances writes of her opinion of Disraeli and of one of her books and her surprise at the interest it has received. In 1879, having left her husband permanently and returned to London, she shows that she is still interested in the theatre remarking to Georgiana on Henry Irving's performance in the Merchant of Venice as Shylock, a production in which Ellen Terry played Portia: 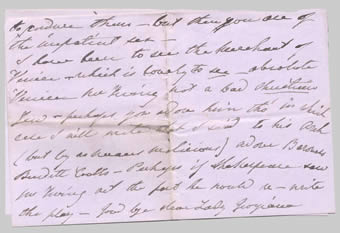