Charlotte was a 39 year old widow and housewife, from Middlesborough, admitted on 18 January 1893 to what was then called the North Yorkshire Pauper Lunatic Asylum. The papers for her admittal can be seen below.

This was stated to be her first attack and had lasted for three weeks, previous to her admittance at Clifton she had been in the Middlesborough Workhouse but had recently become depressed. Her nurse at the workhouse stated that Charlotte was suspicious of those around her and had tried to escape from imaginary men, and it was also said that she heard people knocking on the walls and speaking to her. The medical practitioner who declared her to be of unsound mind declared that in his opinion she ‘looked in distress of mind'. She was also said to be suffering form General Paralysis - the usual medical phrase for the last stages of syphilis. 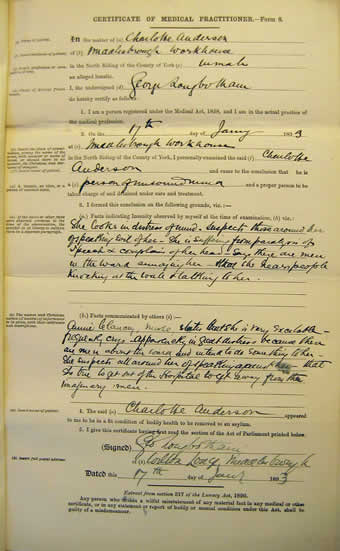 On her first examination she was declared to be well nourished although with a tremor in the muscles on her face. By 1 February the tremor was said to be more marked and and on 22 February it was reported to have spread to her left arm and hand. After the administration of liquid arsenic (a popular therapeutic treatment used into the twentieth century) she was thought to have become more cheerful, however she was soon reported as being depressed again.

Charlotte stayed in the hospital for two years. On 20 June 1894 a new phase in her behaviour was reported – she was declared to have become excited and to be constantly taking off her clothes although she became calmer. On 1 July 1895 she was reported to be 'violently excited and maniacal'. In the next fortnight she became much worse, losing movement and becoming weaker until she died on 13 July. The cause of death was recorded as general paralysis. 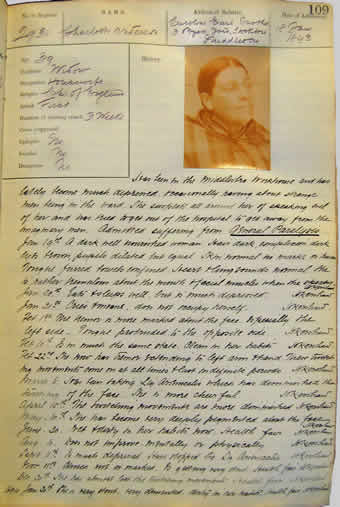