The Society of Friends (known as the Quakers) became involved in political and social movements during the eighteenth century. In particular, they were the first religious movement to condemn slavery and would not allow their members to own slaves. They were to play a prominent role in the Anti-Slavery Society. These concerns are reflected in some of the papers of Quaker families and organisations in York, in particular in the records of the Tuke family and of their foundation, The Retreat (a private psychiatric hospital pioneering humane ways of treating the mentally ill).

Amongst the Retreat papers are a number of printed tracts and advertisements, including an 'Address to the Inhabitants of Europe on the Iniquity of the Slave Trade' issued by the Quakers in 1822, a prospectus for the first volume of a work on the "history of the Rise, Progress and Accomplishment of that great Event, The Abolition of the Slave-Trade with proper Engravings" by Thomas Clarkson from the early nineteenth century and an account of the African Institution whose Vice-Presidents included William Wilberforce (MP for Hull and then for Yorkshire and famous campaigner against slavery) and whose council included Granville Sharp, grandson of a former archbishop of York and author of anti-slavery pamphlets and books. This institution, says the leaflet, was founded by 'a number of individuals deeply impressed with a sense of the enormous wrongs which the natives of Africa have suffered in their intercourse with Europe'. 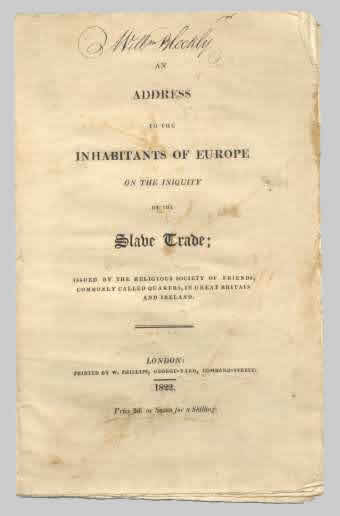 The collection also includes some papers more directly connected to York. In particular there is a sheet issued in 1806 by William Tuke, Thomas Priestman (York Quaker and member of the first executive committee of The Retreat) and Lindley Murray (a Quaker who had settled in York after leaving New England, an abolitionist also known as 'the father of English Grammar') urging members of the Society of Friends to vote to ensure the return of William Wilberforce as member of parliament for Yorkshire, based upon his opposition to the slave trade. 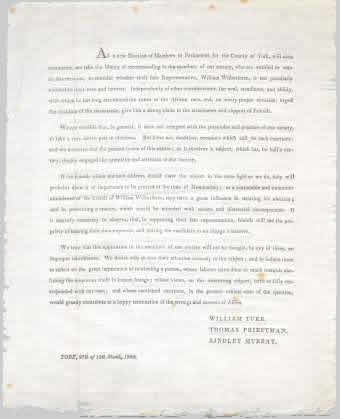 Unsurprisingly, the Tuke family archive include more papers in support of Wilberforce, including a second copy of the document above, a pro-Wilberforce tract entitled 'he that Rides may Read' and a statement by the Committee of Friends in York (with Samuel Tuke as secretary) in support of Wilberforce, dated 1807. His records also include a pamphlet entitled 'Account of the Slavery of Friends in the Barbary States' owned by Samuel Tuke.

Concern in The Retreat about the slave trade also reached beyond the executive committee. In 1827, the servants of the Retreat sent a petition to the committee, requesting that sugar should be bought from East India rather than West India in the future, because of the "great oppression of the slave trade" in the West Indies. 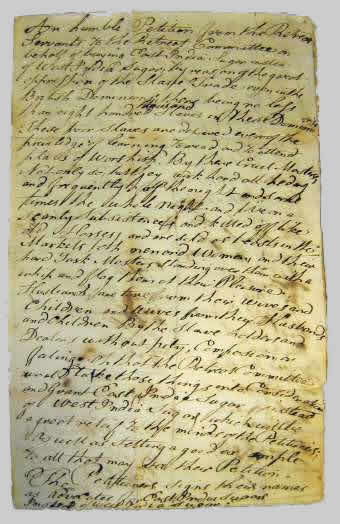 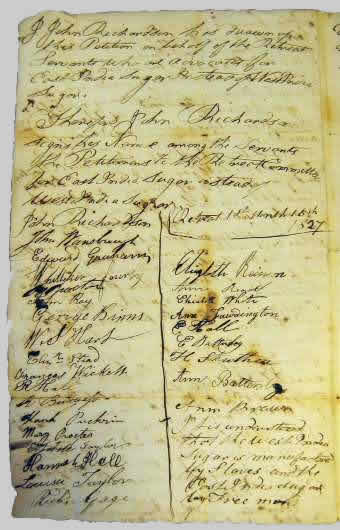 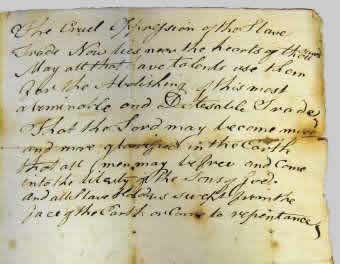 ‌
(Click the images for larger versions and transcription)

The minutes of the Committee make no reference to having received this petition.