The story of Charles Williamson

The story of Charles Williamson is the tale of a man whose mixed race in early nineteenth century Britain does not appear to have affected his prospects. He was the son of an East India merchant from London and is described in the copy of his late baptism as a mulatto – that is a person of mixed race – born in Bengal suggesting that his mother was Indian. The story of his early life is told partly by his account, 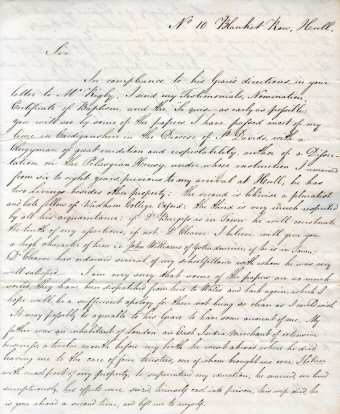 and partly by that of an elderly, blind widow, Margaret Hopkins, in Cardiganshire who has made a statement before the justices of the peace. 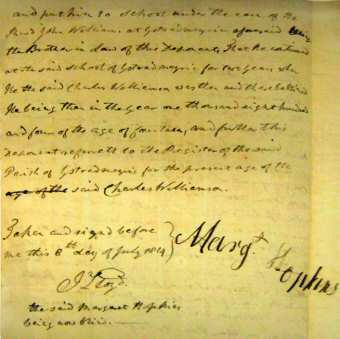 ‌
(Click the images for larger versions and transcription)

His father had moved abroad, leaving London, a year before Charles' birth, and eventually died there. At eight years old Charles was passed to the care of trustees. According to Margaret Hopkins he was mainly in the care of George and Elizabeth Dickenson, and at George Dickenson's death, four years later, Charles was brought to Wales. Other evidence, including Charles' account, suggests that he was in the care of a man – possibly of a man and woman. Two years after his arrival in Wales Charles was baptised at the supposed age of 14 – a transcript of his baptismal entry was sent by his former tutor, John Williams. 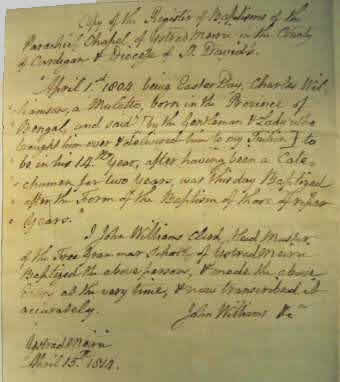 The bankruptcy and imprisonment of Charles' guardian may have prevented his attendance at University. He continued to be educated in Wales and worked, before his ordination, as a school classical assistant in Hull. He was, however, able to pass the Archbishop's examination for prospective ordinands and on ordination became curate of Bishop Burton, a position which earnt him £50 a year, a slightly reduced stipend claimed to be because he was a single man. Two years later he was ordained as a priest, when he was still described as curate of Bishop Burton. The records for York do not tell us what happened to him after this: possibly he moved out of the diocese.