Although Elizabeth I had declared in 1596 that 'blackamoors have no understanding of Christ or his Gospel' from the seventeenth century there were frequent references to Black people in church records, particularly to their baptisms. By the eighteenth century such baptisms were relatively frequent. In 1764 the new Archbishop of York, Robert Drummond, carried out a visitation of his diocese, which meant every parish answering a set of questions including one about recent adult baptisms. All such baptisms were meant to receive the permission of the bishop of the diocese and so were of interest to him. The replies to this query, together with the surviving correspondence with the archbishop and the parish’s own records reveal the story of several men brought to England as slaves and baptised in Yorkshire.

One of the questions Archbishop Drummond asked of all the parishes was which adults had been baptised since he became archbishop (in 1762). Several of the replies refer to the baptism of black servants or slaves. At Darfield, the vicar reported the baptism of Thomas York, an East Indian servant of Lieutenant John Marriott who was 17 years old.

His baptism appears in the annual transcript of parish register entries sent to the archbishop for 1762 under the 9 December.

At Hutton Rudby the vicar recorded two adult baptisms, one of them of 'George Othello, an adult whose age is uncertain, baptized 27 July 1763. This George Othello is a black.'

The entry doesn't say that this man was a servant or slave but the surname Othello suggests he may have been: many Black slaves were given classical or literary names by their masters.

The final reference in the visitation records is from the parish of Wakefield where Richard Brown, a 16-year-old black is said to have been baptised 'since your Lordship’s coming to be bishop'.

This baptism does not appear in the Wakefield parish register transcripts for 1762, 1763 or 1764. There is, though, a surviving letter to the archbishop from the vicar of Wakefield to the archbishop, which probably gives something of the circumstances of this case. It concerns a black boy whom Mr Thomas Charnock had brought to England from North or South Carolina who 'seems to be about 16 years of age' and requests permission for his baptism. 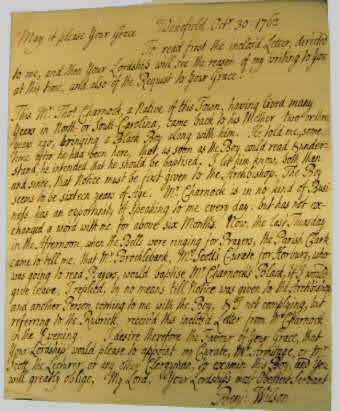 Other correspondence between the archbishop and his parish clergy reveal other, similar baptisms. At Wakefield again in February 1764 the vicar sought permission for the baptism of a young Black man of over twenty who 'belongs to Colonel Prescot'. As this wasn’t mentioned in Drummond’s visitation the baptism had presumably not taken place by then. 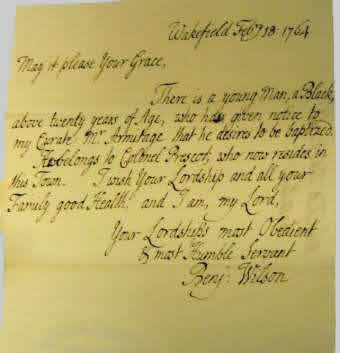 Finally, there is a letter from Nottingham (until 1837 Nottinghamshire was part of the diocese of York). It concerns a 'Negro servant' of about 22 years old, brought from the East Indies by 'a gentleman who lives in my parish of St Mary' and provides an evaluation of the character and intelligence of the young man as well as asking permission for his baptism.

It is important to remember that in the eighteenth century there was some confusion about the status of a person brought to England as a slave: in 1762 Lord Chancellor Henley had declared that 'as soon as a man sets foot on English ground he is free' and although this was later successfully challenged in the courts it was widely (and erroneously) believed amongst slaves themselves that baptism set them free and thus a baptism was often a cause for great celebrations.