[Back to Edward Hewitson's story] 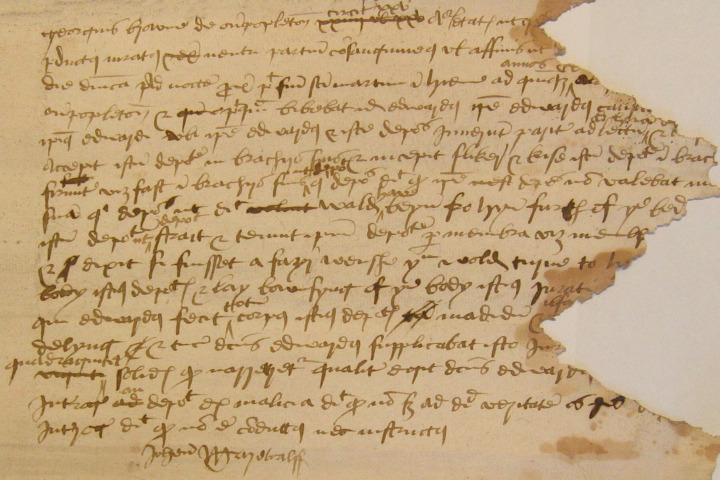 George Browne of Over Poppleton, about 25 years of age as it is believed … produced, sworn and not related or of the household of either party …. On the Sunday aforesaid on the night next after the feast of St Martin in Winter five years ago … Over Poppleton and when after this Edward had drunk the same Edward … of the same Edward where the same Edward and this deponent both went to bed and … he took this deponent in his arms and began to flicker (meaning: caress) and kiss this deponent in his arms … firmly, that is fast in his arms as he deposes, which deponent says that the same deponent did not want … his which deopnent, as he says, would have been [away] from him forth of the bed … this deponent, as he deposes, strait and held this deonent by the limbs, that is … and he said if only he was a fair wench then would turne to … the body of this deponent and lay bowsing (usual meaning: drinking) of the body of this witness … which Edward made this deponent’s whole body wet and … dealing and then the said Edward asked this witness … forty shillings which was told … as he says the said Edward … asked whether he bore witness from malice he said no but in order to speak the truth … the witness says that he was not coached or instructed [in what to say].