Overview: Agriculture will have to generate a 40-50% increase in food production in the next decades. One strategy to achieve this is developing improved crop tolerance to detrimental abiotic conditions that occur all over the globe and can depress crop yields by up to 80%. Work in our lab aims at understanding plant responses to stresses such as salinity and arsenic toxicity but also the way plants deal with a lack of essential mineral nutrients such as potassium and non-essential ones such as silicon.

Experimental approaches: To study the above aspects, we use a range of techniques that vary from single molecule electrophysiology (i.e., patch clamp, for example  to characterise ion channels that catalyse K movement across the plasma membrane and tonoplast), to whole plant physiology (e.g. measuring growth parameters and tissue ionic composition) and to population genetics (e.g. genome wide association studies (GWAS) to identify loci and genes that are involved in the above stresses). Some examples are given below.

Roles and regulation of vacuolar K channels: TPK channels play a role in K nutrition but also in stomatal functioning. We have studied these channels in model plants (Arabidopsis) and crops (rice) and published data on the role of TPKs in K nutrition, drought and osmotic stress (e.g. Maathuis 20121; Gobert et al 2008; Ahmad et al 2015). For example, electrophysiology showed that TPKs are mechanosensitive and as such endomembrane TPKs may function as cellular osmosensors.  Interestingly, TPKa and TPKb, which are extremely similar proteins, localise to different types of vacuole in rice: By using protein chimeras and site directed mutagenesis, we identified the relevant domains and residues that cause this distinction (Isayenkov et al 2011). More recently we identified a leucine rich repeat (LRR) membrane bound kinase (KIN7) which phosphorylates TPK1 in the vacuolar membrane and as such catalyses ABA-induce stomatal closure (Isner et al 2017; Figure 1). 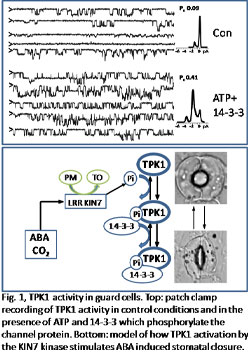 The molecular basis of arsenic transport:Our lab was the first to identify specific NIP aquaporins as responsible for arsenite uptake in plants (Isayenkov and Maathuis 2008). We further studied the role of NIPs in Arabidopsis and rice (Lindsay and Maathuis 2016; 2017) and identified rice cultivars with high resistance. We used heterologous expression strategies to functionally express the yeast arsenite efflux system ACR3 into Arabidopsis and this improved Arabidopsis growth in the presence of As (Ali et al 2012).

Identifying rice tolerance loci: A recent genome wide association study (GWAS; Patishtan et al 2016) identified a robust salt tolerance locus on chromosome 8 (Figure 2), which in collaboration with the IRRI rice institute, we are now introgressing into elite rice cultivars. We are using CRISPR/Cas to make loss of function mutants in several candidate genes that are present in this locus with the aim of pinpointing the most important genes. Further GWAS studies on K nutrition identified a Na transporter (HKT2;1) as candidate to improve rice potassium use efficiency (Hartley et al 2019).

‌
My aim as a teacher is to engage students with the subject content to establish a firm foundation of knowledge from which to stimulate critical thinking and promote understanding.

‌
My lectures cover various aspects of bioenergetics and membrane transport (in both animals and plants), particularly at the molecular level, i.e. structure function analyses of ion channels, carriers and pumps.

‌
My tutorials are under the broad heading of plant abiotic and nutritional stress. We typically discuss the role of various nutrients in detail and then read papers on wider aspects of plant nutrition, crop cultivation, plant biotechnology and plant physiology. On the basis of these materials we practise informal and more formal presentations, essay writing and further transferrable skills.

‌
Projects offered are aligned to the on-going research conducted by my lab group. However, there is also a degree of flexibility within project topics so that the interests of the student are taken into consideration and ideas and hypotheses on the project direction are encouraged. The sort of techniques and skills the student will learn typically include whole plant physiology, microscopy and chemical analysis.