My interests are in the fundamental causes of Parkinson’s disease (PD), using fly models of inherited PD to understand why (some dopaminergic) neurons die more than others. Fly models of PD are robust and recapitulate the main features of the disease because flies share many genes with humans. As a physiologist, I am able to use fly eyes, muscles and brains to investigate the first steps in the loss of function that precede cell death.

Mutations in parkin causes early onset PD (mean age of onset 32 years) and so we examined the effect of manipulating this gene in the young form of the fly, the maggot. We find that parkin maggots crawl more slowly, and developed a novel assay to demonstrate their bradykinesia-like phenotype, in which neural function is weakened, although muscle function remains intact. Removing oxidative stress transgenically, shows that the fundamental defects occur in ATP production, leading to disruption of neurotransmission, and that oxidative stress is not a fundamental cause of neuronal death in PD. 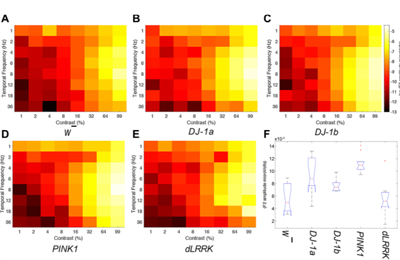 Young adult flies have hyperexcitable visual responses, and we hypothesise that the mitochondria cannot keep up with the demand for ATP. This leads to a toxic cascade and cell death.

LRRK2 mutations are the most common genetic cause of late onset (adult) PD, but the function of this gene is still unknown. In the fly, expression of mutations that lead to PD cause a rapid degeneration of the visual system, and loss of sight. This is most pronounced when the gene is expressed in dopaminergic neurons. In this case, we observe a spreading pathology, with non-dopaminergic neurons dying through mitochondrial dysfunction. This is exacerbated when the metabolic load is increased by keeping the flies in a ‘disco-chamber’ with repetitive visual stimuli.

LRRK2 is a kinase, and it has been suggested to phosphorylate over 50 proteins. We find that both competitive (BMPPB-32) and allosteric (Vitamin B12) inhibitors of LRRK2 rescue visual and movement disorders induced by LRRK2 mutants. Furthermore, we are now testing how LRRK2 interacts with potential partners, knocking them down and testing for amelioration of LRRK2 dysfunction.

An advantage of Parkinson’s-related mutations

The faster, stronger responses seen in young flies suggest the hypothesis that people who go on to have Parkinson’s later in life may have an advantage in their earlier years – faster reactions in ‘flight or fight’ situations, or other stressful situations (e.g. interviews).

‌
My aim as a lecturer is to provide a starting point for the understanding of neurodegeneration, so that the students become familiar with the ideas, terms and methods of investigation. This will allow them to explore relevant papers, and to be able to compare and contrast the competing theories of cell death mechanisms. In particular, I want students to realise how the therapeutic landscape is changing with new drugs in clinical trials or in development.

‌
As a project supervisor, I want students to share in the excitement of hands on biology, addressing novel problems at the whole organismal level. Physiology, notably neurophysiology, offers a top-down view of brain function in health and disease, and so a contrast to the reductionist, molecular approach. Working with flies, however, allows the molecular insights to be linked to whole organism studies, opening the eyes to 21st century neuroscience. 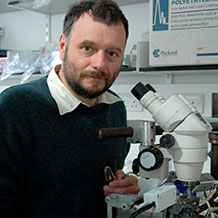