Structure, function and maintenance of the mammalian cell nucleus

Error-free transmission of genetic information across cell generations is essential to avoid accumulation of DNA sequence changes, including potential disease-causing mutations. In addition, high-fidelity maintenance of epigenetic information - the state in which DNA exists in association with proteins and RNA in the cell nucleus - is also essential for normal healthy cell function, because this provides finely tuned control over how the genetic information is used.

Using a wide range of approaches, from development and cell biology, through genetic analysis and structural biochemistry, we are studying the normal function of CIZ1, the diversity of alternatively spliced forms, and the changes in CIZ1 that are linked with a wide range of human cancers.

We are also developing findings that CIZ1B, a variant form, is present in lung tumours, and can be detected in the blood of people with early stage disease. The potential of this biomarker to become the basis of a blood test for the early detection of lung cancer is being developed by University of York spin-out Cizzle Biotechnology limited.

A longstanding research goal is to identify and exploit new factors, including CIZ1B, that might also serve as targets in cancer therapy or as markers of cell proliferation potential. More recently, in light of new findings, our questions are about the extent to which CIZ1 might contribute to the onset of epigenetic instability in the incipient tumour cell, and ways in which instability might be avoided.

Figure 1. Immunostaining for the CIZ1 protein (red) in mammalian nuclei where DNA is stained in blue.

‌
As a teacher I aim to give students a framework into which they can slot the knowledge they acquire through reading, and the skills they develop through the program. I want students to be able to understand how different topics interlace to build a comprehensive picture of my area of biology, out of which appreciation of underpinning principles can emerge. It was not until I felt I had 'filled in the gaps' between topics that were taught in isolation during my own education, that new questions began to occur to me. I aim to help my students get to that stage so that their originality can emerge.

‌‌
‌I am a mammalian cell biologist mainly, with background in biochemistry (PhD) genetics (BSc) and developmental biology (post-doc) so I tend to teach my subject area from multiple angles, and also to use a range of different techniques in my research. Both are focussed on the functional organisation of the mammalian cell nucleus, the transitions that the nucleus undergoes during the cell cycle and during differentiation, and disruption of its organisation in diseases such as cancer. My main teaching area is cancer biology, which is a vast and fascinating subject that will touch most of us at some points in our lives.

‌
‌My tutorials often start with an overview of what we do in the lab, as a way to introduce techniques and concepts in mammalian cell biology. This usually results in questions and discussion, and often identifies an area which we choose to investigate further in subsequent sessions. The overall theme is the structure and function of the mammalian cell nucleus which relates to my research on epigenetic control of gene expression. Later in the tutorial set students are encouraged to pick a topic that they are interested in, within this overall theme, and to bring their new knowledge to the group. Tutorials are the most interesting and rewarding of my teaching activities because they can be quite unpredictable, and by the end of a set I feel that I know my students.

‌‌
‌Students taking projects in my lab will be working on something related to our ongoing research. We have a wide array of molecular tools that have been developed over the years, including antibodies that can recognise specific alternatively spliced forms of the CIZ1 protein, which plays a role in organising DNA replication in nuclear space. Many of these forms of CIZ1 are linked with disease yet we know very little about them. Projects might use specific antibodies to uncover the expression patterns, interactions and regulation of variants using techniques that include mammalian cell culture, sub-cellular fractionation, quantitative immunofluorescence microscopy or western blot. We also use quantitative gene expression analysis, bioinformatic techniques and many other approaches dictated by the question we are trying to answer. 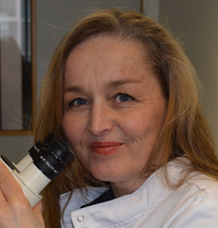