Human activities have altered the composition of plant communities, with species lost through extinction and gained through the introduction of non-native species. I use experimental, observational and quantitative techniques to understand the causes and consequences of these alterations to plant communities, and address more general questions on the factors that control the distribution of plant species.

I collaborate widely to work across a variety of ecosystems, including tropical forests and temperate grasslands, and am involved in long-term field experiments in the Mariana Islands and Australia. I am particularly interested in interactions between plants and seed dispersers, soil microbes and competitors.

Dispersal ensures that plant propagules reach locations suitable for their germination, survival and growth. Consequently, it influences species distributions and the composition of plant communities. Many plant species rely on animals for the dispersal of their seeds. With collaborators in the US and Australia, my research examines the extent to which seed dispersers promote the invasion success of non-native plant species and how the loss of seed dispersers (due eg to extinction) impacts plant communities. 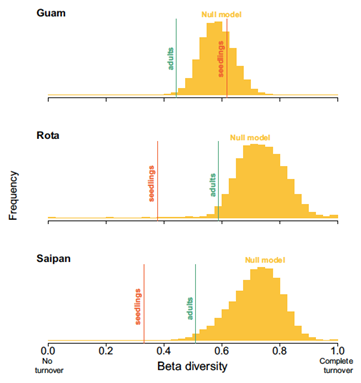 All seed dispersers on the island of Guam have been lost to extinction. We used species composition data from Guam to build a model of what beta-diversity (a measure of species turnover among sites) would look like in the absence of seed dispersal. Comparing model predictions with data from two islands with seed dispersers (Rota and Saipan) revealed that seed dispersal homogenizes plant communities: beta-diversity values (red and green vertical lines) on islands with dispersers were well below values predicted (yellow bars) from a model parameterised using data from Guam. Wandrag et al. 2017. PNAS.

Interactions with soil microbes can influence the ability of plant species to colonise new locations, tolerate or adapt to environmental change and coexist in multi-species communities. With collaborators in the UK, the Netherlands and Australia, my research examines: 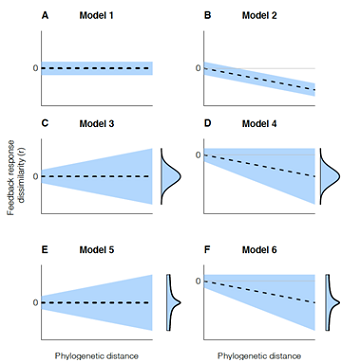 Much research has aimed to identify a phylogenetic signal in the outcome of interactions between plants and soil microbiota (plant-soil feedbacks). By fitting data from pairwise feedback experiments to different models of the ways in which a phylogenetic signal could arise, we showed that feedback outcomes become more divergent with increasing phylogenetic distance, and a pattern of divergence that suggests major co-evolutionary shifts in the way plants interact with soil microbiota. Wandrag et al. 2020. New Phytologist.

‌I aim to teach students to think critically, to link theory with practice, and to develop a solid understanding of basic ecological principles and scientific practice. I focus on building transferable skills and incorporate real-world examples from my research into my teaching.

Projects offered are generally linked to my existing research, though students are encouraged to develop their own ideas and interests within the general areas of invasion biology, plant community ecology, and the ecology of biotic interactions. Projects typically involve some combination of field, glasshouse, lab, or desk-based work. Those that are strongly grounded in ecological theory are encouraged. Opportunities to gain or develop skills in research methods and data analysis, and to work or collaborate internationally will be provided. 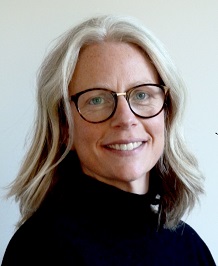