Marine picocyanobacteria of the genera Synechococcus and Prochlorococcus are numerically dominant in vast tracts of the ocean where they play a critical role in carbon cycling as major primary producers. Although a minor component numerically, photosynthetic picoeukaryotes (PPEs) also play a key role in marine CO2 fixation. However, these PPEs additionally act as bacterivores in oligotrophic gyre ecosystems, actively consuming picocyanobacteria. Such biotic control of natural picocyanobacterial populations likely also includes viral lysis. Indeed, cyanophages actively shut down host CO2 fixation whilst maintaining photosynthetic electron transport during infection bringing a new twist to how phage subvert the metabolism of their host.

As well as biotic control of cell abundance, natural picocyanobacterial populations are also structured genetically by abiotic factors such as temperature, nutrient availability and light intensity. Specifically for Synechococcus, we have developed a high resolution phylogenetic framework to fine tune the geographical partitioning of this genus in situ, which is particularly well typified along Atlantic Meridional Transects. In concert with in-depth genomic and metagenomic studies, we aim to uncover the specific adaptation mechanisms of the numerous Synechococcus phylotypes observed, that will help explain the successful colonization of this key genus throughout the marine environment. 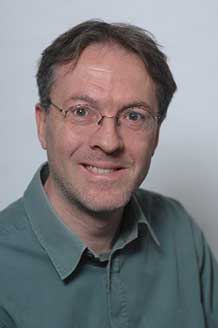 Dave Scanlan is Professor in Marine Microbiology in the School of Life Sciences at the University of Warwick. After completing his BSc in Durham and PhD at Warwick he undertook a Royal Society European Exchange Fellowship at the Institute National Agronomique in Paris before obtaining a Royal Society University Research Fellowship at Warwick. He is currently a member of the NERC Peer Review College and serves on the Editorial Boards of the Journal of Phycology and Frontiers in Microbiology.