Housing device could be key to combating malaria

A new type of housing modification reduced the incidence of childhood malaria in West African villages by around 40-50 per cent, according to a new research study. 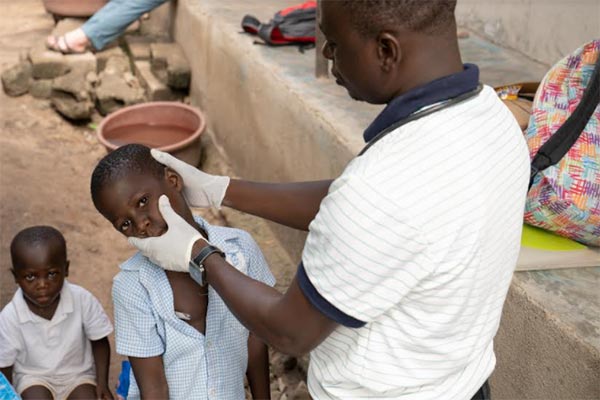 Credit: Daniel Lesher, Penn State. A member of the medical team examining one of the children from the study villages for symptoms of malaria

The intervention uses window screening and PVC tubes - known as EaveTubes - containing insecticide-coated screens fitted under the eaves of houses. It combines a physical barrier plus an insecticide - a method which both blocks and kills mosquitoes, protecting people in the house and the wider community.

The research project was centred on villages in Côte d’Ivoire. It was led by the Director of the York Environmental Sustainability Institute Professor Matthew Thomas while in his previous post at Penn State University.

The findings were published in The Lancet.

“With screening plus EaveTubes - what we call SET - not only do people within the house gain some protection but because you’ve killed the mosquitoes that enter the tubes, they can’t then go on to bite your neighbour. So, you get two actions: you get personal protection, and you get community protection.”

Many traditional house designs in Africa have open eaves. Closing the eaves blocks mosquitoes, but it also reduces ventilation. The EaveTube design stops mosquitoes but has the added benefit of still allowing air to flow.

“In this study, we essentially elevated the concept of an insecticide-treated bed net to the level of the house. We demonstrate that turning the house itself into a ‘lure and kill’ device significantly reduces incidence of malaria infection among children, even in areas where malaria-carrying mosquitoes are highly resistant to the insecticides that are most commonly used on bed nets.”

The research involved a large collaborative team integrating entomology, epidemiology, social science and health economics, together with a commercial partner. The work was supported by the Bill and Melinda Gates Foundation.

Impact and cost-effectiveness of a lethal house lure against malaria transmission in central Côte d'Ivoire: a two-arm, cluster-randomised controlled trial was published in The Lancet