Scientists have shed light on how immune cells navigate to the lymph nodes, where they help to fight off harmful bacteria and viruses. 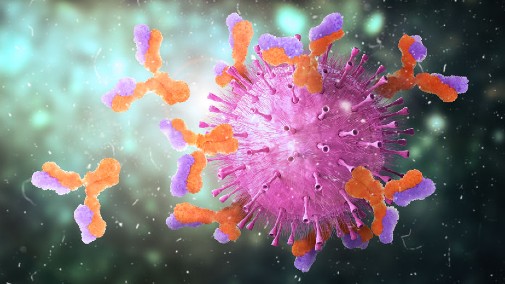 The study, led by scientists at the University of York, reveals how B-cells – crucial agents of the immune response – are faced with a perilous path, swimming through a dense network of other cells, blood and lymphatic vessels, to reach the follicles of the lymph nodes.

The research team discovered that structures inside lymph nodes leave a trail of chemical signals that guide B-cells through these complex tissues – like miniature lighthouses guiding a safe shipping passage.

Once they have reached the lymph nodes (glands which function as filters trapping viruses and bacteria before they can infect other parts of the body) B-cells confront invading pathogens and take molecules from their surfaces known as antigens. They process and present these to T cells, which then manufacture antibodies allowing them to identify and destroy the invaders.

The research is an important step forward in understanding how our immune system works and also why it fails, the authors of the study say.

Co-lead author of the study, Professor Mark Leake, from the Physics of Life group in the Department of Physics at the University of York, said: “Our study suggests that B-cells sniff out a chemical trail which allows them to swim over relatively long distances in a highly complex microenvironment to reach their key destination.

“Relying on a single chemical transmitter to act as a beacon across the whole of the lymph node wouldn’t do the trick, since the signal becomes too dilute and swamped by noise. Instead, these multiple signals are like having a trail of breadcrumbs that the cells can follow.”

The study may solve the mystery of how cells which are a hundred times smaller than a millimetre are able to travel over distances of around a metre to get to where they are needed in the body.

An international team of researchers from multiple disciplines including immunology, biophysics, cell biology, mathematics and computer science contributed to the research.

The team used fluorescent tags on signalling molecules to track their location in the lymph nodes of mice and human biopsy samples. They employed maths modelling and computer simulations involving machine learning to map out the cell architecture of the follicles of lymph node tissues.

Prof Leake added: “The only way we could gain this incredible new insight is by forming a large research team with a broad range of expertise crossing between multiple traditional science disciplines.