I'm still the new one in the Department, having joined at the begining of 2015, but I already feel very much at home here - everyone has gone out of their way to make me feel welcome. I'm based over on campus in the BioArCh unit, but during term I'm in King's Manor just as much.

I got my own MSc from York more than a decade ago now. Since then I've studied and worked at Cambridge, UCL, and in New York, but I always wanted to come back here. Like many York students, I fell in love with the beautiful, historic city - but it's more than that. The Department here is one of the most exciting places in the UK to do archaeology right now. There's a real buzz, always new people and new projects, but it's still small enough to be friendly and supportive. I can honestly say that there's nowhere I'd rather work.

As Lecturer in Zooarchaeology I teach everything to do with animals in archaeology, including a lot of hands-on bone practicals. I'm also in charge of our zooarchaeology lab facilities and extensive reference collections of mammal, bird, and fish bones. Still, I do find time to teach some of my other interests - such as the European Neolithic - too. From early 2016 I'll also take over as director of undergraduate programmes, so new students can expect to see quite a lot of me. My favourite part of teaching is supervising student projects and dissertations. There are few things as satisfying as helping a student to plan a project out and then watching them bring it to a successful conclusion - especially when they take it in new directions you hadn't even considered!

What I love most about archaeology is the constant challenge: of finding new ways of understanding the past from the smallest and most unlikely-sounding remains; of pulling together a thousand seemingly insignificant traces and making something significant of them. So I'm very excited to be part of BioArCh at York, where I'm surrounded by colleagues and students who are genuinely pushing the boundaries of what we can say from old bones, or from food residues on pottery, or even from the plaque on your teeth.

My own research looks at how humans used and effected their environments over the long term, whether that involves farming around prehistoric villages or the globalised supply chains of late medieval cities. And that's another great thing about archaeology: the sheer variety of times, places, and themes that you can choose to explore. In the last few years I've had the chance to study topics as disparate as early farming in the former Yugoslavia and medieval fishing in the Baltic states (and I'm writing this on a Turkish bus, en route to fieldwork at a Neolithic site). 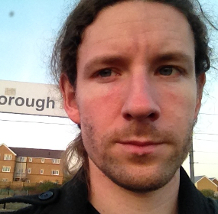