Mark Edmonds holds the second Anniversary Chair of Archaeology, at York. He took his first degree in archaeology at Sheffield, before pursuing his PhD at Reading. Prior to his appointment at York, he taught at Cambridge and Sheffield.

Mark’s research over the past decade or so has developed on several fronts; in work on Prehistory, on landscape and memory and on the social dimensions of technology. Focused at first upon the Neolithic and Bronze Age of Britain and North-Western Europe, these interests have recently expanded to deal more directly with biographies of landscape from prehistory to the present day. This has encouraged a concern with contemporary perceptions of landscape, with interdisciplinary collaboration and experiments in writing and the practice/performance of fieldwork. Mark is interested in exploring new connections between archaeology and the visual and performing arts and have been involved in several projects which have culminated in exhibitions and performance pieces.

Mark has also undertaken a number of projects designed explicitly to involve people from a varied range of communities, where fieldwork has provided a context for dialogue, debate and active participation. The largest of these to date was focused on Gardom's Edge in the Derbyshire Peak District. Run in collaboration with the Peak District National Park, this encouraged participation by people from local and broader communities as well as collaborations with a variety of artists, theatre groups, schools and other agencies.

Over the past few years, he has completed a book on the prehistory of the Peak District and another on the landscape history of Central Cumbria. Both used experiments with text and images to create new forms of narrative, the latter taking the Lake District as a lens through which to look at the impact of the Romantic tradition on contemporary landscape archaeology. Two monographs have also been completed through work with the Cambridge Archaeological Unit. The first detailed prehistoric activity along a transect through the Cambridgeshire Fens. The second focussed on the Bedfordshire river gravels, charting the prehistoric occupation of the area over time, and interpreting the sequence in terms of attitudes to 'the past in the past'.

Despite his best efforts, he still remains hopelessly fascinated by prehistoric stone tools and the potential that they offer for our understanding of past lives. 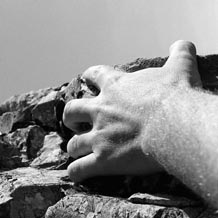