Archaeology as a Tool in Building Civil Society in Indonesia

Archaeology is a science that study the past through its material remains. Archaeology has been used as teaching material in the education system and for research purposes only, archaeology as a science can be used more broadly for deeper purposes such as creating the best social model for the future through past experiences that have been successfully interpreted by the archaeologists.

However, the road to get there is still very winding for archaeology as a whole because it has to go through many stages such as engagement with the public or what is often referred to as public archaeology. Many countries have applied public archaeology to protect their country’s heritage and transform them into a state or local superiority that has a positive impact on the political, economic, and social aspects.

My PhD research is focused on the close links between nationalism, nation building and the archaeological record as expressed through heritage within the context in Indonesia. To see the impact of archaeology as a discipline in building civil society in Indonesia in terms of identity, ideology, economics, etc. by seeing the system in the United Kingdom as a reference. The main aim is to understand, create, and implement a system that can make archaeology one of the main tools in advancing Indonesia.

Tondi earned his BA in Indonesian Archaeology from Universitas Indonesia in 2016, and his dissertation focused on typology of figurative motifs in rock art at the Sasere Oyomo Site, Kaimana, West Papua. He undertook a Masters at the University of Birmingham in Archaeology (Cultural Pathway) where he specialized in landscape archaeology and his dissertation was about augmenting the meaning of rock art: a case study in Kaimana, West Papua and Burrup Peninsula, Western Australia.

After he finished his masters in 2017, he worked as a research assistant at Universitas Indonesia for about a year and was involved in several projects such as digitizing the museum collection in Mangkunegaran Palace, Surakarta, Central Java and Made a learning tools to support local excellence in Sawahlunto, West Sumatra. He finally decided to continue his studies again at the University of York in July 2019.

His main interest is about the implementation of archaeology in a country on political, economic, and social contexts. More generally, he is interested in prehistoric archaeology, rock art, public archaeology, cultural resource management (CRM) specifically in Indonesia. 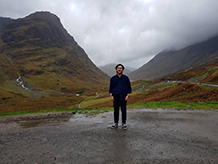