I was born in Philadelphia, where I began my craft career working on a variety of historic buildings and monuments throughout the region. In 1999, I moved to South Carolina to attend Coastal Carolina University, where I earned my undergraduate degree in History. I then relocated to Savannah, Georgia, where I continued to work in the traditional crafts and conservation fields while attending graduate school.

After completing my M.F.A. in Historic Preservation at the Savannah College of Art and Design, I was employed as an instructor at various colleges within the Savannah area. I recently returned to the Philadelphia area, where I accept the position of Head of Building Arts at Bryn Athyn College, where I will be formulating the first Bachelor’s of Fine Arts (BFA) in traditional building within the United States.

My research focus is wide-ranging, but has concentrated on the reintroduction of traditional trade skills within underserved college populations, as well as urban revitalization and design issues within the United States. My specializations include:

Master of Fine Arts, Savannah College of Art and Design / May 2005

Senior Thesis: “Those who build cities should not dwell in hovels”: The Homestead Steel Strike of 1892.

Thesis Title: Craft Education in the United Kingdom and the United States: A cross-cultural examination of ideals, approaches and solutions

This project is a detailed examination into the approaches that the Unites States and Great Britain have taken to re-introduction heritage craft training to future traditional craftsperson. It will focus on the history of craft education, its current status as well as potential future directions within both cultures.

Both the United States and Great Britain face a crisis in the training and supply of traditional craft workers. Within both societies, different approaches have been taken to address these concerns, based on the evolving ethos of conservation theory within their respective cultures.  The approaches taken reflect the evolution of conservation theory and practice within each culture, which is expressed through variations in perception of value, age, and methodology, as well as distinct differences in terminology.

This research will focus on qualitative studies of various training programs in each country, examining the perceived success and failures within each system, based on the philosophical context of conservation practice in both societies. Research methodology will include field interviews with both students and trainers, comprehensive reviews of training scheme delivery methods as well as analysis of industry needs. This contextual research will form a theoretical and practical framework for the delivery of heritage craft education within both societies. It is from this research that a comprehensive understanding of appropriate delivery methods for heritage craft education within both cultures can be attained

Framework will also be monitored, and the project intends to critically analyse the processes of transition in real-time and present the findings throughout the course of the project.

Lim, Jong Hyun and Hartley, Stephen. “In Search of the Utopian: The Urban Morphology of the “Main street” Movement” Traditional Dwellings and Settlements Review, Journal of the International Association for the Study of Traditional Environments. Vol. 22, no 1 (2010): 59-61 Working Paper Series: Reimaging the Politics of the Ideal, vol. 233.

-“Reading and Understanding Historic Photographs” May 13 2010.

Hartley, Stephen. “Gullah Heritage and Culture of the South Carolina and Georgia Coast” Paper presented to the Savannah College of Art and Design, Savannah, GA. May 22 2006. 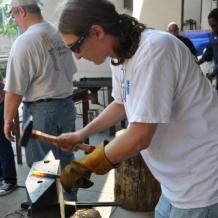