Power, Place and the Archaeology of the Medieval Anglo-Scottish Borderland c. 1200- c. 1500 AD

International borders are complex and dynamic political constructs with significant local impacts. Borders, placemaking and society share a multitude of important connections which can be both frustratingly ephemeral and fundamentally material, and yet, the materiality of historical political borders is often overlooked. In the UK, the archaeological record of the medieval Anglo-Scottish borderland is a remarkably underutilised resource, and despite the fluidity and porosity of both the medieval and modern border, relatively few projects extend their research across the borderline. This project seeks to address this shortcoming by considering holistically for the first time the materiality of placemaking and power on both sides of the medieval Anglo-Scottish border and their relationships with wider cross-border dynamics.

The project integrates English and Scottish archaeological data with theoretical frameworks from wider frontier and borderland studies through a two-part, multi-scalar structure. Part One comprises an assessment of the archaeology of the eastern borderland through the construction of a cross-border geodatabase synthesising a wide range of spatial data sources. Part Two applies the project geodatabase toward high-definition analysis of two types of landscapes of power fundamentally embedded in cross-border power dynamics: medieval meeting places and fortified residences. These landscapes explore the unique perspectives of different players in medieval power dynamics, explicitly examining for the first time the multiplicity of ways the borderland was negotiated and perceived through the medium of place.

Overall, the project shifts the traditional dialogue of Anglo-Scottish archaeology away from comparisons of similarities and differences across the borderline to a more nuanced understanding of the distinctive material characteristics of the region. It presents an exciting opportunity to explore interdisciplinary theories regarding borderland societies from an archaeological perspective while also illuminating significant aspects of an understudied region at the forefront of British politics in the late medieval period.

Aubrey Steingraber is a field archaeologist with specialisms in medieval archaeology, historical archaeology and Pacific Northwest coastal archaeology. She received her BA from Western Washington University with a degree in Anthropology (Archaeology Concentration) and East Asian Studies, winning the preeminent undergraduate awards given by both departments for her two senior research projects. Aubrey earned her MA in Medieval Archaeology from the University of York in 2014 where she applied her strong interdisciplinary background to investigate borderland dynamics and regional identities along the medieval Anglo-Scottish border through the comparison of metal-detected finds in Northern England and Southern Scotland. This project won the 2014 Geoff Egan Prize awarded by the Finds Research Group and sparked her interest in frontier and borderland studies which she is continuing to develop through her PhD research.

Aubrey previously worked as a staff archaeologist and field director for ASM Affiliates, Inc. in Washington State. In that role, she conducted and led over 50 field projects on both historic and prehistoric sites ranging from late 19th-century mining ghost towns to pre-contact Northwest Coast shell midden sites.  In addition to her career in Washington, she has participated on projects in Japan, the UK, and on an award-winning historic garden restoration project at Manzanar National Historic Site in California.

Throughout her career in archaeology, Aubrey has continuously worked to improve relationships between archaeologists and the public through creative approaches to education and public engagement in both formal and informal settings. She has been involved with numerous non-profit organizations such as the Southern Oregon Historical Society and the Churches Conservation Trust. She has also been an active member of the Association for Washington Archaeology, participating in public engagement events with that organization.

Authored and co-authored over 45 technical reports (lead author on 17 of these) on archaeological fieldwork performed for ASM Affiliates, Inc. (Stanwood, WA) including:

Paper: ‘Monte Cristo’s Gold: A Case Study of a Hard Rock Gold Mining Town in Washington’s Cascade Range at the Turn of the 20th Century’, March 2017, Annual Meeting of the Society for American Archaeology (Vancouver, BC, Canada) 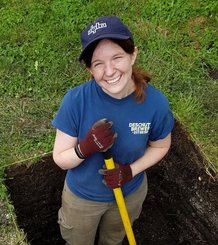