Purple White and Green: The Material Construction of Women's Suffrage 1832-1928

The careful construction of identities, and radical dissemination of merchandise during the women’s suffrage movement of the late 19th and early 20th century was innovative, drawing on contemporary consumerism to create a recognisable brand that brought cohesion to the movement and spread awareness of the campaign message.

With an integrated text and material based analysis of the wider range of material culture used by 'Votes For Women' and other campaigns, this PhD will examine the active role of objects in the women's suffrage movement, offering new insight into the creative resistance of activists who used objects to convey their message, and the collective identities that were formed and articulated through material culture. My research will contribute to an emerging area of archaeology concerned with radicalism; this has long been under-explored because of the ephemerality of sources associated with radical movements. Research into the radical use of objects by women will highlight how material culture enabled the disenfranchised to become politically involved, while bringing a new dimension to research on women's political history by addressing: 1) How objects helped to support suffrage campaigns and construct collective identities; 2) The types of material culture appropriated by suffrage campaigners, and how this reflected their social status/roles.

Kirsty’s 2017 MA thesis was a critical study on representation and suffrage in museums, which examined suffrage exhibition content and the challenges curators faced in representing women during the 2018 centenary. This work won the York Civic Trust Education Award for Best MA dissertation in Cultural Heritage Management, Department of Archaeology, University of York 2017 and Kirsty was invited to discuss this project with curators of the Vote 100 project at the Houses of Parliament.

Before beginning her PhD, Kirsty worked for York Museums Trust at York Castle Museum. She also continues to run her own small business which she began in 2016, selling her artwork online and in independent stores. 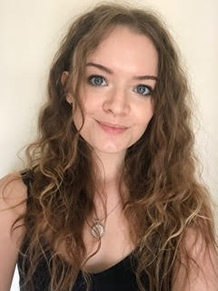