My research explores the relations between past peoples and the animals around them. Within that, I am particularly interested in how archaeological bone assemblages form, beginning with the disposal decisions that people make and going on through the action of scavengers, sediment chemistry, and the sampling decisions that we take on site. These taphonomic studies can seem to be over-detailed and pedantic, but understanding the formation of archaeological assemblages is fundamental to making credible and rigorous inferences from them.

A different line of research concerns the animals that have adapted to our homes and settlements and that live alongside us. We are familiar with rats and mice, pigeons and crows, today but for how long has this been going on? These commensal animals tell us something about the ecology of past settlements - what colonisation opportunities they offered - but may also tell us about past attitudes to animals. Are rats vermin or pets or just a convenient snack? A major book on this subject was published in 2013.

Work continues on livestock, deadstock and animal husbandry in towns across Anglo-Saxon England and Viking Age Europe (in Environmental Archaeology 15 [2010], Quaternary International  [2013]), with further work and a major synthesis on urban assemblages from York.  This has demonstrated the existence of spatial patterning in the condition and composition of faunal assemblages which relates to ‘neighbourhood’ patterns of selection, consumption and disposal.  It has also highlighted the complexity of the taphonomic processes which need to be considered in these contexts. This research has led to the proposal of new methodologies for dealing with large urban assemblages, initially published in Archaeology of York 19(2), now focussing on protocols for retention and disposal to ensure the future research value of animal bone archives.

At the same time, I have been pursuing research on the evidence for Late Upper Palaeolithic activity in the Karstic Dales of North Yorkshire. This has involved a detailed analysis and reappraisal of historic collections from cave excavations and the application of high precision C14 dating to human and animal material. The primary focus of this work has been to resolve stratigraphic problems with the deposits from specific caves and more general biostratigraphic issues relating to this distinctive region during a period of high amplitude climate change. This has led to a broader concern with the multi-period nature of many deposits of human and animal remains in caves, in particular, the use of caves for burial and other rites in the Mesolithic, Neolithic and Bronze Age. This work continues, in collaboration with Dr Tim Taylor (University of Bradford) and Tom Lord.

One other area of research interest is the diagnosis and interpretation of animal palaeopathology. This is partly methodological, seeking to improve the criteria that we use in diagnosis (e.g. in Documenta Archaeobiologiae 6 [2008]), and partly interpretive, using the prevalence of pathologies as another source of information on past peoples' use of and attitude towards the animals around them.

I lead a 2nd year practical skills module in 'Animal Bones' and the Group Project module that follows on from it. Between them, these modules give a grounding in zooarchaeology and encourage a ciritical approach tot he published literature.

I am module co-ordinator for the 'Human Evolution' Special Topic, which is taught by a diverse team from Archaeology and HYMS. My main 3rd year module is the 'Animals and Archaeology' Assessed Seminar module, in which we explore an eclectic series of topics around the archaeology of past interactions ebwteen our species and other animals.

I am Director of Studies for MSc Zooarchaeology, and teach a series of modules that form the core of this degree programme as well as acting as important options for the MSc Bioarchaeology programme. 'Bone and Bones' introduces bone as a living tissue and reviews the comparative skeletal anatomy of vertebrates from fish to mammals. 'Bone Taphonomy' gives a seminar and practical-based introduction to this complex but essential topic. In 'Exploring the Assemblage', a series of practical classes introduces and assesses several key areas of data collection, such as age at death and biometry. Finally, 'Zooarchaeology in Context' reviews zooarchaeology projects world-wide to show how evidence is used, and how human-animals relations have developed over a global and long-term perspective.

Investigation of the genomics of Palaeolithic horses and their coat colour generated a good deal of press interest. The University's press release can be seen here. 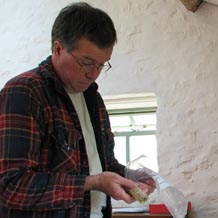