Niklas is a specialist in coastal archaeology and the analysis of high-resolution climate archives found in mollusc shells.

He did his PhD at York as part of Geoff Bailey's ERC Project DISPERSE, where he studied the mobility and subsistence strategies of coastal populations in the southern Red Sea. His research on the seasonal consumption of shellfish, which had led to the accumulation of over 3,000 shell middens on the Farasan Islands (Saudi Arabia), involved the analysis of oxygen isotope ratios to reconstruct past sea surface temperatures and to reveal seasons of mollusc collections.

This research led Niklas to move to Greece on a Marie Curie fellowship at the Institute of Electronic Structure and Laser, where he led the ACCELERATE Project. Within this project, he aimed to make the geochemical analysis of mollusc shells more efficient through the use of Laser Induced Breakdown Spectroscopy (LIBS). His test involve shells from all over the world including the UK, Denmark, Spain, Italy, Croatia, Greece, Turkey, Malta, Tunisia, Libya, Saudi Arabia, Oman, Japan, the Philippines, Tasmania, New Zealand, the US, Canada, and Brazil, with shells from the modern period as well as over 30,000 years old.

Being at the overlap of Archaeology and the Geosciences, Niklas takes part in the Association for Environmental Archaeologists, where he is grants coordinator since 2017. He is also member of the editorial board for the Open Access journal Open Quaternary as well as Scientific Reports.

Although not employed at York anymore, Niklas remains research relationships involving shells and coastal archaeology with the Department and occasionally teaches on the use of geosciences in Archaeology as guest lecturer. 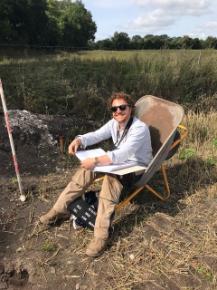