Publication: The Viking Great Army and the Making of England 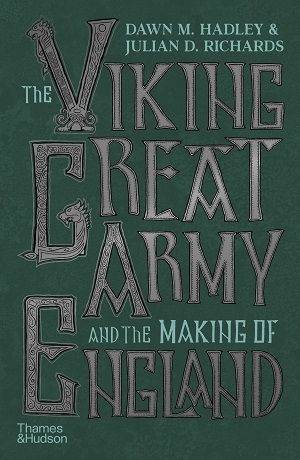 Congratulations to Professors Dawn Hadley and Julian Richards on the publication of their new book: 'The Viking Great Army and the Making of England'. Out now.
The Viking Great Army that swept through England between AD 865 and 878 altered the course of British history. Since the late 8th century, Viking raids on the British Isles had been a regular feature of life, but the winter of 865 saw a fundamental shift that would change the political, economic and social landscape forever. Instead of making quick smash-and-grab summer raids for silver and slaves, Vikings now remained in England for the winter and became immersed in its communities. Some settled permanently, acquiring land and forming a new hybrid Anglo-Scandinavian culture. The Viking army that arrived in 865 has come to be known as the 'Great Army', and it was here to stay. Its presence was a catalyst for new towns and new industries, while transformations in power politics would ultimately see the rise of King Alfred the Great and make Wessex the pre-eminent kingdom of Anglo-Saxon England. A newly published book by York archaeologists Dawn Hadley and Julian Richards tells the story of the Viking Great Army, bringing together the latest archaeological evidence, to rewrite the narrative of this formative period in the history of England. Drawing on the most up-to-date discoveries and the latest scientific techniques, recent research by the authors at the Viking Great Army’s winter camp at Torksey in Lincolnshire has revolutionized what we know about its size, activities and social makeup, as has the wealth of newly recovered evidence from metal-detectorists. Unfolding like a great detective story, the account in The Viking Great Army and the Making of England traces the movements of the Great Army across the country, piecing together a new picture of Viking Age England in unprecedented detail, from swords, coins, jewellry and the burials of great warriors to the everyday objects that ordinary farmers and craftsmen discarded. It is the definitive story of a vital period in British history.
Congratulations to Dawn and Julian on bringing together a long history of work in what will certainly be an important volume.
Hadley, D.M. and Richards, J.D. 2021. The Viking Great Army and the Making of England, London: Thames and Hudson.

You can find out more about the Viking Great Army, and Julian and Dawn's work at Torksey and beyond, at their lecture for the Festival of Ideas next month.

If you're interested in learning even more about all this, check out our MA in Medieval Archaeology.