Geoff Bailey is corresponding author on two open access articles that have been published by Quaternary Science Reviews on underwater shell middens in Denmark and the Gulf of Mexico in the USA. 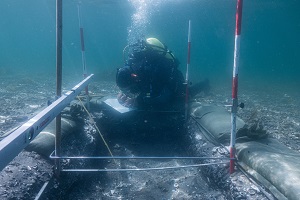 Geoff Bailey is corresponding author on two open access articles that have been published by Quaternary Science Reviews on underwater shell middens in Denmark and the Gulf of Mexico in the USA.

The research is the result of an international collaboration of archaeologists, geoarchaeologists and geophysicists from Australia, Denmark, the UK and the USA, working with the Deep History of Sea Country project funded by the Australian Research Council and led by Jonathan Benjamin of Flinders University

Shell middens are a classic archaeological marker of intensive use of marine resources and coastal settlement and occur in their hundreds of thousands around the coastlines of the world, including the famous ‘kitchen-middens’ of Denmark. They are a rich source of information about cultural and economic history.

They are dominated in appearance by the shells of discarded food molluscs such as oysters and cockles, producing mounds that are several metres thick and extend over hundreds of square metres. They also often include other food remains such as the bones of fish, fowl and land mammals, remains of dwelling structures, pits and fireplaces, and sometimes human burials.

Almost all known examples date from about 6000 years ago, the beginning of the era of modern sea levels, and have been taken as evidence for a ‘maritime revolution’ in human history. However, sea-levels were far lower than present before 6000 years ago. Archaeologists have long suspected that much older shell middens might have existed on these drowned shorelines but have assumed that these sites would have been washed away by sea-level rise. Or else they would be just too difficult to distinguish from natural accumulations of dead shells on the seabed.

In new research, the team have used techniques ranging from geophysical survey and underwater excavation to soil micromorphology to demonstrate the presence of underwater shell middens offshore of the coast in eastern Jutland in Denmark and the Florida coast of the Gulf of Mexico.

The Danish fieldwork was led by Peter Moe Astrup of Moesgaard Museum, and the Florida research by Jessica Cook Hale of the University of Georgia.

The results are important because they provide the first unequivocal evidence that cultural shell deposits are preserved under water. They also demonstrate that these deposits have a distinctive sedimentological and geochemical profile that will make it easier to identify them through simple underwater survey techniques.

“Sea levels have been lower than present for 95% of human existence, exposing millions of square kilometres of territory for human occupation”, noted Prof Geoff Bailey, who holds joint appointments at the University of York and Flinders University. “These new results should encourage exploration of drowned coastlines and push much further back in time the deep history of human engagement with the sea and its resources”.

For further information, see the article in the Conversation.