An international team of researchers has shown that old wives' tales that snails can tell us about the weather should not be dismissed too hastily. 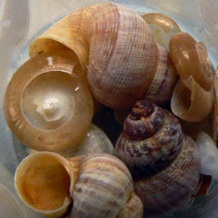 While the story goes that if a snail climbs a plant or post, rain is coming, research led by the University of York goes one better: it shows snails can provide a wealth of information about the prevailing weather conditions thousands of years ago.

The researchers, including scientists from the Scottish Universities Environmental Research Centre (SUERC), analysed the chemistry of snail shells dating back 9,000 to 2,500 years recovered from Mediterranean caves, looking at humidity at different times in the past.

Their findings, which are reported in the journal Quaternary International, reveal that when the first farmers arrived in Italy and Spain, the western Mediterranean was not the hot dry place it is now, but warmer, wetter and stickier.

The research was led by Dr from York’s Department of Archaeology.

Dr Colonese and his co-authors believe that land snails have great potential as a source of information about human behaviour and palaeoclimatic conditions and therefore should be given much more attention.

Dr Colonese, an EU Marie Curie Fellow in York’s Centre for Human Palaeoecology & Evolutionary Origins, said: “By putting together research on snails from multiple sites across Spain and Italy, we were able to produce a large scale regional picture for weather conditions over the western Mediterranean area.

“This allowed us to observe differences in climate across the region. Interestingly, when compared with previous studies, we found that while conditions on the Atlantic coast of northern Spain were probably much like those of today, on the Mediterranean side in locations such as southern Spain and Sicily, conditions were much more humid.”

Archaeological sites around the Mediterranean basin contain an abundance of land snail shell remains. The researchers selected well-preserved shells for isotopic analysis from the early to late Holocene layers, covering the Mesolithic, Neolithic, Chalcolithic and Bronze Age periods. They looked at the oxygen and carbon isotopic compositions of the shells of Pomatias elegans (or the round-mouthed snail as it is more commonly known), comparing those found in the Iberian Peninsula sites with modern shells of the same species.