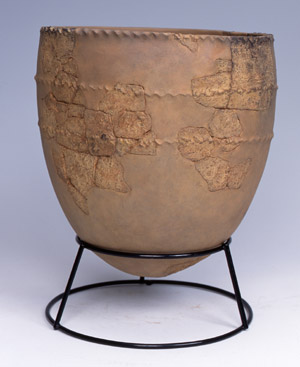 Scientists from the UK, the Netherlands, Sweden and Japan carried out chemical analysis of food residues in pottery up to 15,000 years old from the late glacial period, the oldest pottery so far investigated. It is the first study to directly address the often posed question “why humans made pots?” The research is published in Nature.

The research team was able to determine the use of a range of hunter-gatherer “Jōmon” ceramic vessels through chemical analysis of organic compounds extracted from charred surface deposits. The samples analysed are some of the earliest found in Japan, a country recognised to be one of the first centres for ceramic innovation, and date to the end of the Late Pleistocene - a time when humans were adjusting to changing climates and new environments.

Until quite recently ceramic container technologies have been associated with the arrival of farming, but we now know they were a much earlier hunter-gatherer adaptation, though the reasons for their emergence and subsequent widespread uptake are poorly understood. The first ceramic containers must have provided prehistoric hunter-gatherers with attractive new ways for processing and consuming foods but until now virtually nothing was known of how or for what early pots were used.

The researchers recovered diagnostic lipids from the charred surface deposits of the pottery with most of the compounds deriving from the processing of freshwater or marine organisms. Stable isotope data support the lipid evidence, and suggest that the majority of the 101 charred deposits, analysed from across Japan, were derived from high trophic level aquatic foods.

Dr Oliver Craig, of the Department of Archaeology and Director of the BioArCh research centre at York, led the research. He said: “Foragers first used pottery as a revolutionary new strategy for the processing of marine and freshwater fish but perhaps most interesting is that this fundamental adaptation emerged over a period of severe climate change.

“The reliability and high abundance of food along shorelines and river-banks may well have provided the initial impetus for an investment in producing ceramic containers, perhaps to make the most of seasonal gluts or as part of elaborate celebratory feasts and could be linked to a reduction in mobility. This initial phase of ceramic production probably paved the way for further intensification in the warmer climate of the Holocene when we see much more pottery on Japanese sites.

“This study demonstrates that it is possible to analyse organic residues from some of the world’s earliest ceramic vessels. It opens the way for further study of hunter-gatherer pottery from later periods to clarify the development of what was a revolutionary technology.”

The research was supported by the Leverhulme Trust and Japanese Society for the Promotion of Science.

The paper, ‘Earliest evidence for the use of pottery,’ is published in Nature.

More information about BioArCh at the University of York at www.york.ac.uk/archaeology/centres-facilites/bioarch/