Annabell Zander and colleagues have published a chapter "Archaeology across the Pleistocene-Holocene boundary in western Germany: Human responses to rapid environmental change" in Volume 3 of the Proceedings of the 2016 Amiens Conference (published by the Société Préhistorique Française). 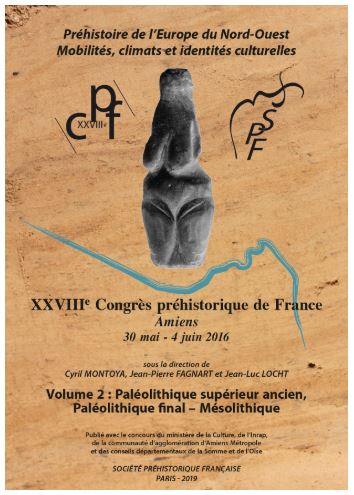 Abstract:
In recent years, new insights into the Final Palaeolithic and Mesolithic in North Rhine-Westphalia have been gained. The Early Mesolithic human remains of the Blätterhöhle in Hagen should be mentioned specifically as they even attracted international attention. Here, a stratigraphic sequence containing hearth remains and lithic assemblages from the Early to Late Mesolithic has been excavated for the first time in this region. Recent results of excavations demonstrate that the sequence even dates back to the Late Pleistocene. Moreover, newly dated sites and single finds of the Final Palaeolithic-Early Mesolithic transitional period from this region suggest varying influences from northern and southern as well as western regions on the development of the Westphalian Mesolithic. Several sites, which have been assigned to the broad blade complexes or the "Long Blade industries"/the Belloisien due to the distinct blade technology and microlithic projectile points, seem to represent the initial stage of the Mesolithic in the Rhineland and in Westphalia.