Archaeologists from York have contributed to a book which sheds remarkable new light on the political and social significance of Sheffield Castle. 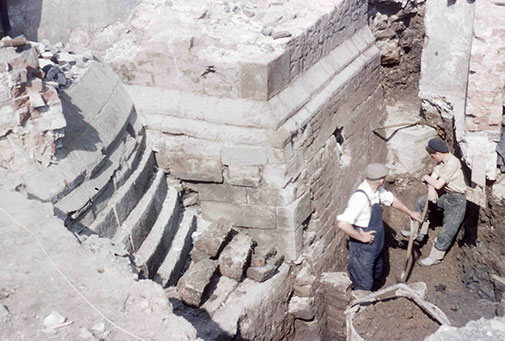 Construction workers dig a foundation trench next to the remains of Sheffield Castle's gatehouse in the late 1950s (image courtesy of Museums Sheffield).

Professor Dawn Hadley, of York’s Department of Archaeology, has worked alongside Professor John Moreland at the University of Sheffield, and colleagues at Wessex Archaeology to publish Sheffield Castle: Archaeology, Archives, Regeneration, 1927-2018.

The book reveals that Sheffield Castle - the foundations of which are adjacent to the Castlegate area of the city centre - was once home to one of the most powerful castles in Medieval England. Although it was demolished during the English Civil War in the mid-17th century, it continued to have a powerful hold over the development and prosperity of Sheffield, through to the present day.

For the first time, the team has placed the archaeology and history of the castle in its wider medieval landscape, with a particular focus on its relationship with a medieval deer park and associated hunting lodges in the south-east of the city, including Sheffield Manor Lodge, which still stands today, where Professor Hadley led excavations from 2009-11.

It is the first publication to bring together findings of major excavations carried out in the 1920s, 50s and 90s, as well as the results of the most recent excavations of Sheffield Castle led by Wessex Archaeology in 2018.

This new account reveals the castle played a major role in local, national and international affairs in the medieval era, and shaped the development and topography of modern day Sheffield.

Now the archaeologists are calling for the castle, and Sheffield’s significance in the Middle Ages, to contribute to a new identity for the city, which can be celebrated in the redevelopment of the Castlegate area of Sheffield city centre. The team is working with Sheffield City Council to explore how best to use the city’s new found medieval heritage in future regeneration.

Professor Hadley said: “Our analysis of the archives from the 20th century excavations has enabled us to tell the story of the changing contexts in which urban excavation has been conducted over the course of almost a hundred years. We show how archaeological priorities and methods have changed, as have the regeneration agendas with which the archaeologists were engaged from the 1920s onwards.

“We’ve digitised the archives and made them freely available to all via the University of York’s Archaeology Data Service, safeguarding their future for generations to come. We hope researchers and members of the public across the world will be inspired to find their own stories in the archives.