Human self-control evolved in our early ancestors, becoming particularly evident around 500,000 years ago when they developed the skills to make sophisticated tools, a new study suggests. 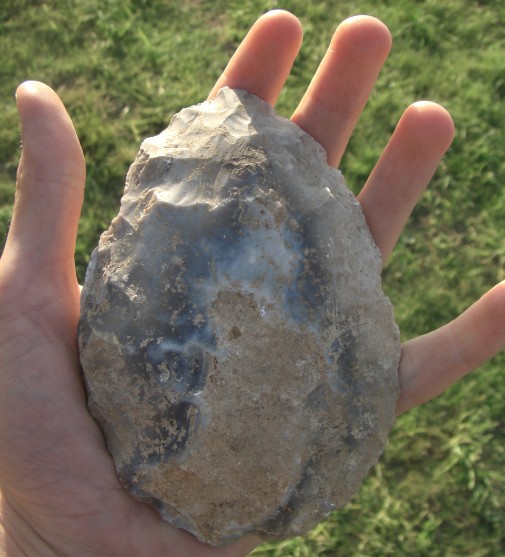 While early hominins such as Homo erectus could craft basic handaxes as early as 1.8 million years ago, our hominin ancestors began to create more elaborate and carefully designed versions of these tools sometime before 500,000 years ago.

The authors of the study, from the University of York, say these advances in craftsmanship suggest individuals at this time possessed characteristics which demonstrate significant self-control, such as concentration and frustration tolerance.

The study highlights a collection of 500,000 year-old flint axes unearthed from a gravel quarry in the village of Boxgrove in West Sussex. The axes are highly symmetrical suggesting careful workmanship and the forgoing of immediate needs for longer term aims.

Senior author of the study, Dr Penny Spikins, from the Department of Archaeology said: “More sophisticated tools like the Boxgrove handaxes start to appear around the same time as our hominin ancestors were developing much bigger brains.

“The axes demonstrate characteristics that can be related to self-control such as the investment of time and energy in something that does not produce an immediate reward, forward planning and a level of frustration tolerance for completing a painstaking task.

“In the present day our capacity for self-control has become particularly important. Without the advanced levels of self-control we possess as a species, lockdown would be impossible. It takes self-control to put the needs of the community first rather than focus on our own immediate ends. Our study offers some clues as to where in human history this ability originated.”

The researchers also point to evidence that the production of highly symmetrical and elaborate axes would have required knowledge and skill accumulated over a lifetime. In one study, it took people trying to replicate the axes discovered at Boxgrove 16 hours of practice to even produce a recognisable handaxe.

Lead author of the study, James Green, a PhD student in the Department of archaeology at the University of York, added: “By deciphering the mental and physical processes involved in the production of prehistoric artefacts, we can gain valuable insights into the abilities of the individuals who made them.

“These axes demonstrate social learning and effortful activity directed at honing skills. They also provide some of the earliest evidence of something being deliberately made in a sequence from a picture in someone’s mind.

“Self-control is not unique to humans, but may have played an important role in our evolution. It’s key to many of the traits which define modern humans such as pro-sociality, cooperation and caring for the vulnerable.”