A PhD student has produced the first digital reconstruction of the skull of a gigantic dormouse, which roamed the island of Sicily around two million years ago. 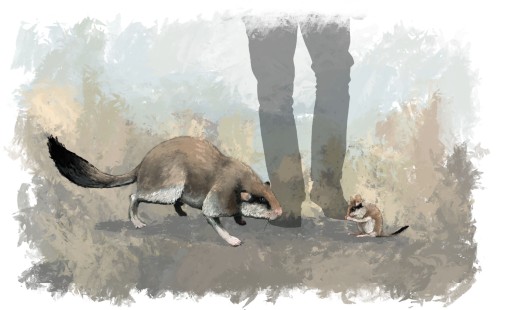 In a new study, the student from Hull York Medical School, has digitally pieced together fossilised fragments from five giant dormouse skulls to reconstruct the first known complete skull of the species.

The researchers estimate that the enormous long-extinct rodent was roughly the size of a cat, making it the largest species of dormouse ever identified.

The digitally reconstructed skull is 10 cm long – the length of the entire body and tail of many types of modern dormouse.

PhD student Jesse Hennekam said: “Having only a few fossilised pieces of broken skulls available made it difficult to study this fascinating animal accurately. This new reconstruction gives us a much better understanding of what the giant dormouse may have looked like and how it may have lived.”

The enormous prehistoric dormouse is an example of island gigantism – a biological phenomenon in which the body size of an animal isolated on an island increases dramatically.

The palaeontological record shows that many weird and wonderful creatures once roamed the Italian islands. Alongside the giant dormouse, Sicily was also home to giant swans, giant owls and dwarf elephants.

Jesse’s PhD supervisor, Dr Philip Cox from the Department of Archaeology at the University of York and Hull York Medical School, said: “While Island dwarfism is relatively well understood, as with limited resources on an island animals may need to shrink to survive, the causes of gigantism are less obvious.

“Perhaps, with fewer terrestrial predators, larger animals are able to survive as there is less need for hiding in small spaces, or it could be a case of co-evolution with predatory birds where rodents get bigger to make them less vulnerable to being scooped up in talons.”

Jesse spotted the fossilised fragments of skull during a research visit to the Palermo Museum in Italy, where a segment of rock from the floor of a small cave, discovered during the construction of a motorway in northwest Sicily in the 1970s, was on display.

“I noticed what I thought were fragments of skull from an extinct species embedded in one of the cave floor segments”, Jesse said. “We arranged for the segment to be sent to Basel, Switzerland for microCT scanning and the resulting scans revealed five fragmented skulls of giant dormice present within the rock.”

The reconstruction is likely to play an important role in future research directed at improving understanding of why some small animals evolve larger body sizes on islands, the researchers say.

“The reconstructed skull gives us a better sense of whether the giant dormouse would have looked similar to its normal-sized counterparts or whether its physical appearance would have been influenced by adaptations to a specific environment”, Jesse explains.

“For example, if we look at the largest living rodent – the capybara – we can see that it has expanded in size on a different trajectory to other species in the same family.”

Jesse is also using biomechanical modelling to understand the feeding habits of the giant dormouse.

“At that size, it is possible that it may have had a very different diet to its smaller relatives,” he adds.

Virtual Cranial Reconstruction of the Endemic Gigantic Dormouse Leithia melitensis (Rodentia, Gliridae) from Poggio Schinaldo, Sicily is published in Open Quaternary. The study was supported by the University of York, Hull York Medical School and the European Federation of Experimental Morphology.