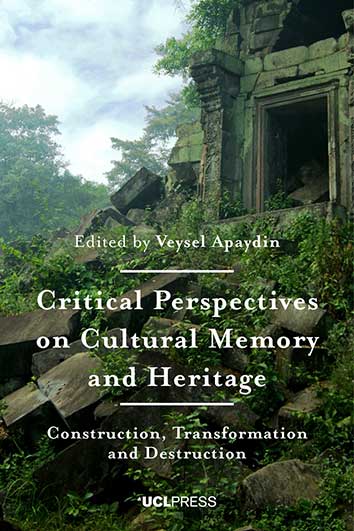 The book, edited by Veysel Apaydin, focuses on the importance of memory and heritage for individual and group identity, and for their sense of belonging. It aims to expose the motives and discourses related to the destruction of memory and heritage during times of war, terror, sectarian conflict and through capitalist policies.

Abstract: Indigenous heritages in Latin America, like in other colonial worlds, exist on troubling foundations. From the onset of colonial-imperial rule, Indigenous identities have come under pressure from European and settler motivations. What began as a strategy of slavery and forced miscegenation developed into one of invisibility and cultural erasure. This policy is different from that in the Anglo-Americas, wherein Indigenous people were largely replaced by settler populations. Indigenous pasts among settler populations are suppressed and the roles played by Indigenous people are largely forgotten, as in the case of the unfolding of the Sixty Years War over the Great Lakes in the United States. Indigenous pasts among ‘mestizo’ populations in Latin America, however have a more complicated position. They are often suppressed, hidden, and repurposed towards the benefits of those in power. Indigenous roots are conjured to create the ‘mestizo’ populations, taken up to form a national narrative. Indigenous heroes are lionized by revolutionaries while contemporary Indigenous people are marginalized; made invisible, or systematically denied their identification as being truly Indigenous. Indigenous heritage is usurped and placed into the national narrative, with little concern for the people with close connections to them. Even Indigenous heritages foreign to the area may be placed as a focus in replacement of the local.

The perpetrators of this are more complicated than being merely settlers, but rather people who have accepted the narrative and power of mestizaje, that is to cease to be culturally Indigenous and to become a mestizo attached to a coloniality-borne nationality. The state of Indigenous heritages is then even more precarious. Many approaches to the elimination of, or the appropriation of the past are undertaken by people whose ancestors are the same as those they marginalize. How then, does this contestation of ancestral pasts play out for each group? With both marginal Indigenous, and powerful mestizo claiming attachments, the history of destructions and appropriations is a difficult issue.

The destruction of Indigenous heritages is not limited to one realm of ‘war, terror, conflict or capitalism’, but rather each of these have found roles to be played. This entry focuses on the strategies of systematic destructions and ‘weaponization’ of Indigenous pasts and heritages. The region of Central America serves as the main focus of this work, as it is a largely invisible area of an already subaltern part of the world: Latin America. More than simply drawing attention to ways in which religious and sectarian, imperial and colonial, capitalist and progressive forces have brought damage to Indigenous communities and their cultures, this chapter also raises matters of survivance. The existences of Indigenous people are not limited to narratives of loss, destruction, or vanishing. So, then, this chapter also discuss reconnection and revivals, and options for the continued existence and dignity of Indigenous peoples, their pasts, memories, and heritages.

Critical Perspectives on Cultural Memory and Heritage: Construction, Transformation and Destruction is open access and available to download for free from UCL Press.